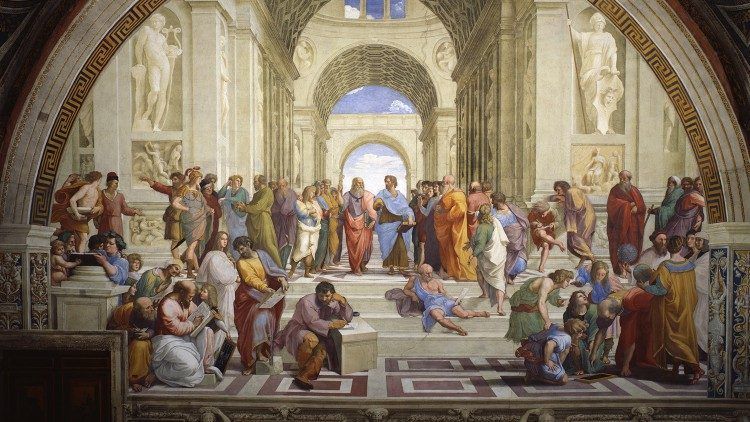 Raffaello Sanzio, most commonly known as Raphael, was a highly-praised artist during the Italian High Renaissance Classical era.

His most prized pieces tend to include those found in the Palace of the Vatican of Rome and the Sistine Madonna.

By taking a look at Raphael’s life, it becomes easier to see what influenced his artistic abilities and led to the progression of a career and legacy that would have him become one of the most famous Renaissance artists.

Keep reading to learn about his childhood, how he became to be such a great artist, and death and legacy, and more.

Raphael was born in Urbino, Italy, on April 6, 1483. During the time in which he was born, Urbino was a hot spot and booming cultural center for artists. Giovanni Santi, which was Raphael’s father, was an artist as well.

He painted for Federigo da Montefeltro, the Duke of Urbino. Because of his artistic abilities and devotion to painting, it should come as no surprise that Giovanni passed down some of his knowledge to his own son.

Giovanni also made sure to expose Raphael to the principles of humanistic philosophy by taking him to the Duke of Urbino’s court.

Magia de Battista di Nicola Ciarla was Raphael’s mother. She was the daughter of a wealthy merchant family that also came from Urbino as well as Colbordolo in the Marche Region.

Magia had three children but Raphael was the only one who survived past infancy. In 1491, when Raphael was only 9-years-old, his mother passed away.

The following year, his father remarried a daughter of a goldsmith. A year after remarrying, Giovanni then passed away.

Raphael was 11 when his father passed away. Giovanni’s brother took on legal guardianship of Raphael and was in charge of the art studio.

However, even though he was in charge of management, it was Raphael who immediately took on the task of trying to ensure his father’s workshop flourished, and he did an excellent job.

In fact, he quickly surpassed his father’s capabilities, and in a short period of time, he became known as one of the finest painters in the city. During his teenage years, Raphael received a commission to go to the neighboring town of Castello and paint for the Church of San Nicola.

It was also during these early years that Raphael received training from Timoteo Viti but many believe it was Perugino who significantly influenced his artistic abilities.

During his first commission at Castello, Raphael was tasked with creating an altarpiece in dedication to St. Nicholas of Tolentino.

After he created The Marriage of the Virgin in 1504, Raphael moved to Sienna. He made the move after receiving an invitation from Pinturicchio, a painter who wanted Raphael to prepare drawings for frescos in the Liberia Piccolomini.

After staying in Siena for a bit, like most Italian artists of the time he then moved to Florence where he resided for four years.

Florence was the center of the Italian Renaissance, and it was also the place where Raphael met his two biggest rivals of his time, Michelangelo and Leonardo da Vinci. Important to note, however, is that Raphael was quite a bit younger than his rivals.

As a leading sculptor Donatello di Betto Bardi would not be considered any kind of major rival.

During his stay in Florence, Raphael gave up his well-known graceful style depicted in Perugino for a grandiose style; this was mostly because Raphael began taking on artistic influences from da Vinci.

Raphael was particularly fond of da Vinci’s use of gestures to create dialogue as well as his techniques of chiaroscuro and sfumato. After a bit of time, Raphael took his da Vinci-derived inspirations to create his own style. He succeeded and quickly gained recognition for his work’s clarity of form and ease of composition.

His contributions during this time were known to be great contributions to Renaissance motivations for wanting to depict beauty as well as Neoplatonic ideas of showcasing human grandeur in art.

It was also during his stay in Florence that Raphael created multiple Madonnas; these pieces embodied multiple facets of artistic abilities exemplified through da Vinci’s experimentation with realism.

One such example is the La Bella Jardiniere in 1507. Also created in 1507 was The Entombment which highly depicted references of the Battle of Cascina of 1504 created by Michelangelo.

Because of Raphael’s ability to quickly and effectively take on styles of other artists and add his own signature style to them, Raphael found himself accused at one point of plagiarism by Michelangelo.

Raphael spent his time from 1508 through 1511 creating multiple pieces that are found in the Vatican’s Stanza della Segnatura. The series of frescos found in the “Room of Signatura” include The School of Athens and The Triumph of Religion.

Both of which are two of the most famous Renaissance paintings ever produced.

Years later, Raphael created another fresco cycle for the Vatican. Pieces in the series include The Liberation of Saint Peter, The Expulsion of Heliodorus, The Repulse of Attila from Rome, and The Miracle of Bolsena.

Most notably, however, was that during this same period of time, Raphael spent much of his time in his own studio creating a series of Madonna paintings, including the famous Madonna of the Chair and Sistine Madonna.

By 1514, Raphael has begun his work in architecture. The pope hired him as his chief architect and his first project was to create a design to be followed for the construction of a chapel in Sant’ Eligio degli Orefici.

Ironically, Raphael passed away on his own birthday in 1520, meaning he was only 37 when he passed. Mysterious causes were deemed as the reason for his sudden death in Rome.