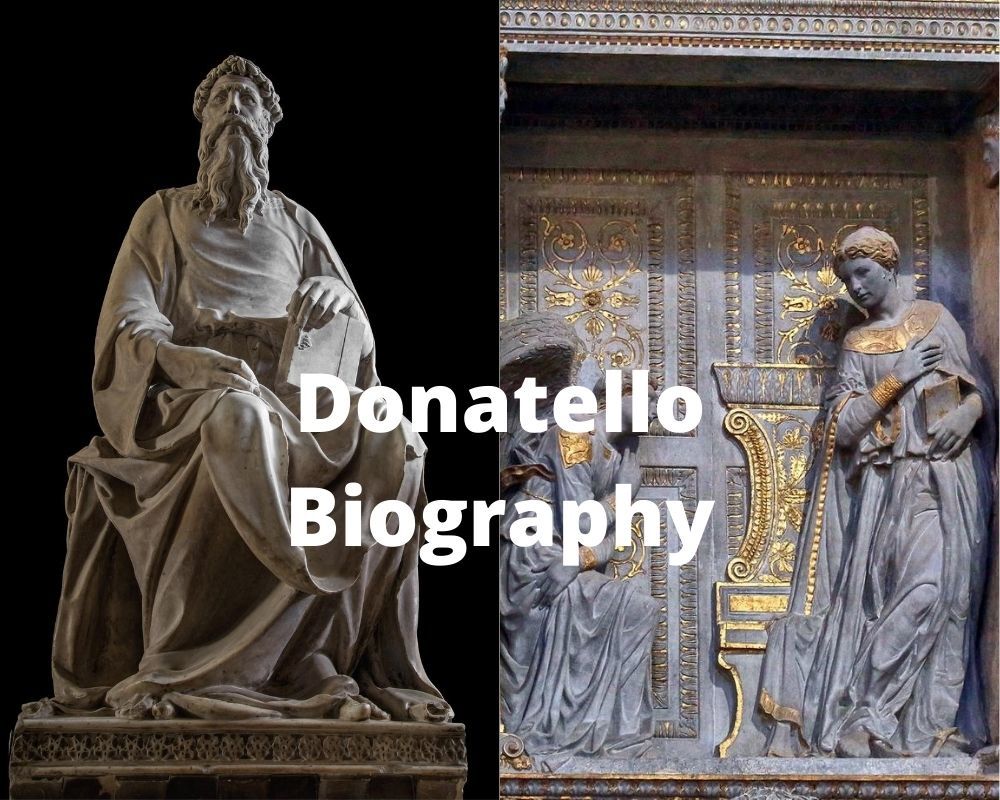 Donatello is considered to be one of the greatest artists from the Renaissance period.

As a sculptor, he is credited with creating the predominant styles of the Renaissance.

Along with Michaelangelo Buonarroti, da Vinci and Raphael he is considered one of leading italian renaissance artists.

He was born Donato di Betto Bardi in 1386 in Florence, Republic of Florence.

Donatello studied under Lorenzo Ghiberti. From this teacher he developed his technical skill. What he did not get during his studies was evidence of style. As he worked and studied over time, he developed his own sense of artistic style and ability to create a feeling of movement in his work.

Donatello was greatly impacted by the actions of his father. His father became involved in the Ciompi revolt in 1378. This was a rebellion formed by the wool carders. He participated in other uprisings against Florence. Eventually, he was sentenced to death. Later he was pardoned.

This did not resonate with Donatello. He has the completely opposite sensibility of his father. Rather, he was elegant and noble.

He received his nickname due to his delicate nature. In the Martelli family home, he received his education. Also, he was trained in goldsmithing.

Finally, he traveled to Rome to embark on a two year study of the arts in antiquity. Many of the ancient ruins in the city inspired many of his future works.

He traveled to Rome with Brunelleschi. During his time there, Donatello became particularly interested in the measurement on the Pantheon’s dome and those of many other Roman structures.

While in Rome, Brunelleschi built structures and Donatello created monuments. Many painters and architects at the time were influenced by their work.

In 1404, Donatello came back to Florence. There he worked in Lorenzo Ghiberti’s workshop. In 1407, he developed a technique using wax for casting and use it to create cast models for the north door at Baptistery of San Juan.

By spending the time to develop his knowledge of goldsmithing and jewelry, he became quite accomplished. Eventually, he had honed his techniques to such as level that he was considered a groundbreaking Italian artist. By this point, his sense of artistic style was fully developed.

In his marble sculptures, one can see a deep sense of realism and seriousness. Much of his work is in direct contrast with the international Gothic style that favored decoration and graceful styling. In 1411, Donatello began the San Marcos series with the Zaccone.

He continued working on the series until 1436. The piece that he is most famous for, The St. George, is part of this series. Around this time, Donatello met the man who would become his apprentice, Michelozzo.

In 1427, Donatello began work on the tomb for Cardinal Brancacci. The sculptural theme of the tomb was the Assumption of the Virgin. Following that project, he began studying bronze casting. This was a difficult art form to fully utilize.

When Donatello returned to Florence, he created the “Song” for the cathedral. He drew on many classic motifs he had admired in Rome. Many of these motifs were recreated for the work in Florence.

In 1443, he was commissioned to sculpt “The Gattamelata”, a large equestrian statue. This was an important piece because of its life size quality. He drew on the Roman Marcus Aurelius’ style to create a sense of dramatic force that hadn’t been seen since works from antiquity.

Donatello followed that sculpture with a project to build the main altar piece for the shrine of San Antonio. For this project, he created seven statues and four reliefs.

During the sixteenth century, the arrangement of these works was changed. However, the completed work displays his sense of dramatic movement and sense of space.

By 1454, Donatello was worked to create pieces that were increasingly charged with emotion and expressiveness. During this period, he also began to experiment with deformation and the emotion it evokes from viewer.

Works during this period include “Judith and Holofernes”, as well as, “Mary Magdalene” in wood. It’s important to understand that up to the beginning of the sixteenth century, Donatello directly and purposefully influenced the sculpture works in Florence.

During the later years, he suffered a serious, prolonged illness. This prevented him from working many times. Without the ability to earn an income, his standard of living was also affected.

Donatello died in Florence on December 13, 1466. He is buried in the Basilica de San Lorenzo. He is located in the crypt under the altar. He was interred next to the tomb of Cosme the Elder.

The sculptor Raffaello Romanelli created the Donatello cenotaph in 1896. Due to his illness, Donatello died in extreme poverty. At his death, he only had 34 guilders left. This was to pay the rent on his home.

For those that knew Donatello, this was not a surprise. He was known to have financial problems throughout his lifetime. Many said that he was completely detached from money.

He was always giving it away to other people. He was also known for making funds available to assistants who worked in the workshop.

Throughout his lifetime, the quality of Donatello’s work was widely recognized. He earned good fees for the works he created. Also, Cosme de Medici gave him pay every week. These funds were sent to him throughout his life.

Donatello created many sculptural pieces that are still studied and appreciated to this day.

Growing out of the Renaissance movement, he went on to develop a sense of style that is uniquely his own. It is that unique vision of style that created the masterpieces that are enjoyed today.

He drove himself to develop techniques to convey emotion and forcefulness in this work. His other focus was the creation of movement in sculptural forms. This dynamism continues to live in his works. It is also something that art historians and artists continue to study to this day.

Donatello was one of the leading sculptures of the Renaissance period and is credited with influencing generations of sculptors. He was an accomplished sculptor and artist who specialized in bronze casting, marble, and wood carving to a lesser extent.

When was Donatello Born?

Donatello was born in 1386 in Florence, Republic of Florence, his full name is Donato di Betto Bardi. Donatello’s father was Niccolo di Betto Bardi, a member of the Florentine Wool Combers Guild.

What was Donatello Famous For?

Donatello was famous for his life like sculptures that were cast in bronze and developed a reputation for developing new techniques and incorporating the newly discovered perspective that allowed his statues to occupy three dimensional space.

Where did Donatello Live?

When Did Donatello Die?

Donatello died on December 13, 1466 in Florence. He is buried in the Basilica de San Lorenzo. He is located in the crypt under the altar. He was interred next to the tomb of Cosme the Elder.

Where is Donatello’s Famous Bronze Statue of David Located Today?

Donatello’s famous bronze statue of Davis is located the Museo Nazionale del Bargello since 1865. It was previously housed in the Uffizi Gallery in Firenze, Italy.