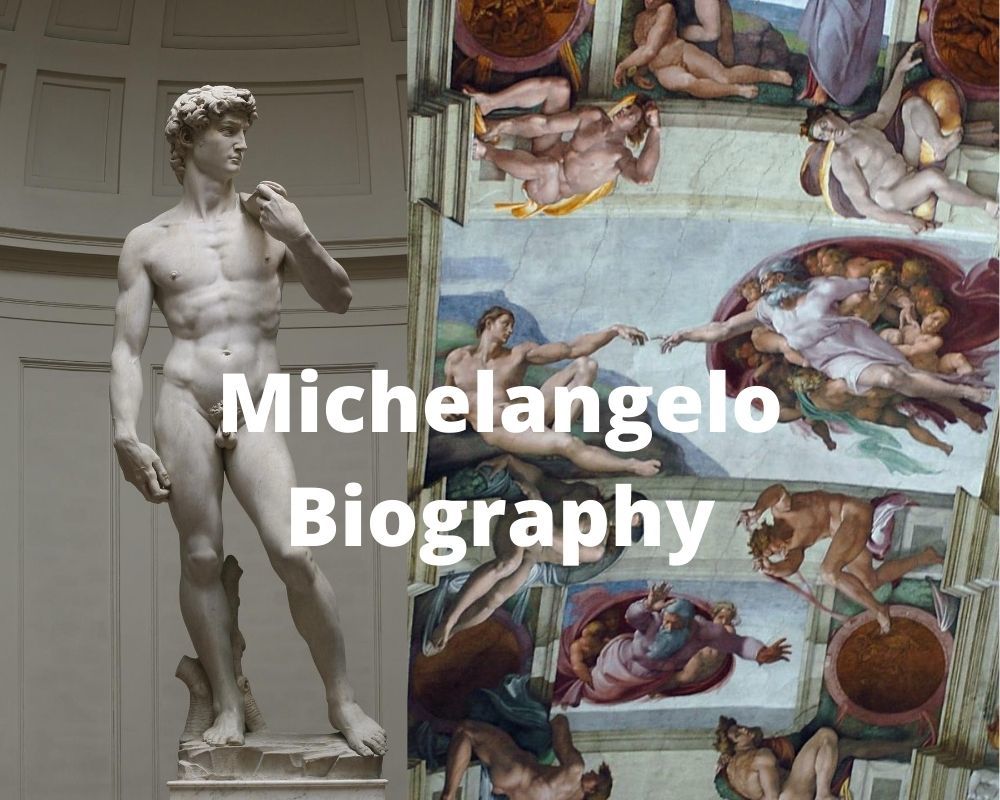 Michelangelo Buonarroti is one of the prominent classical artists from the Italian High Renaissance.

Also known as il Divino, he is well known for his works as a sculptor, painter and architect.

He spent much of his career in the service of the Medici family.

His full name was Michelangelo de Lodovico Buonarroti Simoni. He was born on March 6, 1475 in Caprese, Republic of Florence. He lived a long life and died at 89 on February 18, 1564 in Rome, Papal States.

As a Florentino, he was an essential artist during the Renaissance. His sculptures, paintings and architecture contributions are still revered today.

Michelangelo was born into a wealthy family in the Florentine region. The family moved to Tuscany soon after his birth. His mother died when he was only six years old.

Around this time, he met a painter who was 12 years old named Francesco Granice. They developed a friendship and Francesco encouraged Michelangelo to explore art.

Michelangelo had a difficult and contentious relationship with his father, Ludovico. His father strongly wanted him to take up an administrative position that could develop into a career.

He didn’t see the benefit of pursuing a career as an artist. His father’s inability to see Michelangelo’s true talents created resentments between them.

After years of arguments and tension, his father finally gave up. Following his father’s concession, Michelangelo went to work as a draftsman in the studio of Ghirlandaio. There he was allowed to develop his drafting skills.

It was in this studio that he was introduced to the techniques involved with fresco painting. During his time in Ghirlandaio’s studio, he fully learned this technique.

As Michelangelo developed his skills, he caught the attention of Lorenzo the Magnificent, the head of the Medici family.

Michelangelo was welcomed into the Medici home and lived there as an adopted son. This large measure of support allowed him to begin studying sculpture.

He studied under Bertoldo di Giovanni. His years in the Medici palace and the relationship with Lorenzo de Medici allowed him to get to know many of the prominent humanists of the time who also resided at the palace.

As part of furthering his education while at the Medici palace, Michelangelo begin studying human anatomy. As part of his studies, he began dissecting human corpses at the municipal depot.

While this may seem particularly gruesome, the process allowed him to develop intimate knowledge about human anatomy. These skills translated into his work helping him to use appropriate proportions.

These skills can be seen in the expressiveness of the subjects in his sculptures and paintings. He was able to realistically suggest movement of the human body in his work as a result of these studies.

He took significant risks by studying anatomy this way. Any tampering with corpses was illegal. It was also a societal taboo.

When Michelangelo was 17 years old, he moved to Bologna. This was following the death of Lorenzo de Medici. After spending four years there, he moved to Rome. It was in Rome that the idea of “La Piedad” came to him. This masterpiece is also known as The Pieta.

He completed the sculpture for St. Peter’s Basilica early in 1500. It is considered to be an essential work of sculpture during the Italian Renaissance.

The Pieta demonstrates Michelangelo’s mastery of composition. It also clearly shows his understanding of anatomy. This sculpture garnered him respect as a Renaissance artist.

Pope Julius II commissioned Michelangelo in 1505 to design and sculpt his tomb. The tomb was expected to have 80 large figures.

The project was eventually scaled back. However, Michelangelo created “Moses” for the tomb. This masterwork still resonates with visitors today.

The Sistine Chapel and Michelangelo

There were several differences of opinion between Michelangelo and his patron, the Pope. So much so that he left Rome. He was not gone for long and returned when he received another project from the Pope.

The Pope commissioned him to do a fresco painting on the ceiling of the Sistine Chapel. This ambitious painting project was called “Genesis”. It is considered a masterwork of Renaissance painting to this day.

The difficulty and arduousness of this fresco painting work Michelangelo’s spirit down. The work took over four years to do (1508-1512). Also, the work conditions were poor and generally harsh.

To complicate the matter, he often was not adequately compensated for the work. This made it very difficult for him to work and some have said that it affected his character.

When Pope Julius II dies in 1513, the tomb project was further scaled back. During this time, he was traveling constantly back and forth to Carrara. When he finally returned to Florence, he was finishing commissions from Pope Leon X. He also worked as one of the Republic’s military engineers.

Under Pope Paolo III, he returned to Rome in 1534. This time, he was commissioned to paint the altar in the Sistine Chapel. This work is “The Last Judgement”.

It is one of the largest paintings of Jesus ever made and covers the entire altar wall of the Sistine Chapel.

The pope bestows on him the appointment of painter, architect and sculptor at the Vatican.

The resulting painting show Michelangelo’s mastery of anatomy. The painting depicted the human body nude to show its beauty. Even Christ is shown nude.

While Michelangelo considered the human body to be beautiful and expressive, it was too much for most. It was insisted that the nudes be covered.

Following the death of Sangallo in 1546, Michelangelo continued his work on St. Peter’s Basilica. He is responsible for unifying much of the exterior works.

When he died at 89 years old in Rome, Michelangelo was recognized as a master of the arts in its many forms. This reputation continues today as one of the most famous Italian artists ever along with the likes of Leonardo da Vinci, Donatello and Raphael.