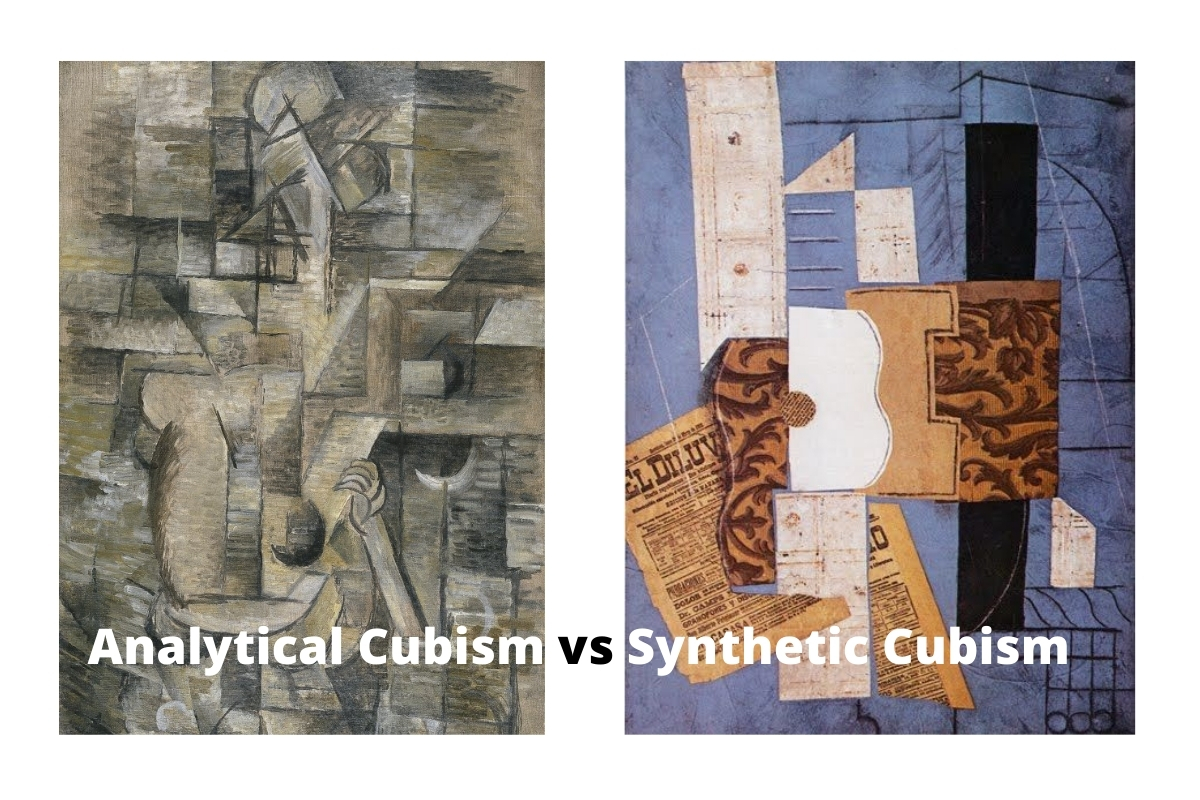 Analytical Cubism vs synthetic Cubism for many casual art viewers the two terms can be a cause for confusion.

Cubism is an art movement that has left a lasting impression on the world of expression as a whole by bringing attention to different perspectives.

The style of Cubism began as many early 20th century artists were moving away from the more traditional methods of presenting a particular subject and developing styles that enhanced the way an item or other subject was presented.

Cubism was originally shunned by many influential art critics and enthusiasts as it went against long-held ideals and traditional methods of portraying a given subject.

Artists like Pablo Picasso and George Braque were pioneers in the Cubism movement and served as some of the most prominent artists during the time period as they were able to bring the new style of painting into the stage of 20th century art.

The principle of Cubism can be described as the artist’s efforts to deconstruct the usual portrayal of a subject or scene and create a collage of visual depictions that give the viewer many different perspectives of the subject. It is often described as deconstructing the subject only to reassemble it in ways that highlight various viewpoints in which the viewer may not have considered on their own.

Unlike other forms of painting that had existed for centuries and even thousands of years before, Cubism revolved around new and novel methods of depicting subjects in a way that had never been done.

Many Cubist artists sought to bring new ways of thinking about art and the portrayal of certain items. Some art critics from the time period when Cubism was beginning to emerge from the more common forms of expression had trouble grasping the overall concept of the Cubist movement. Pablo Picasso is quoted as saying the following.

“The fact that—for a long time—Cubism has not been understood and that even today there are people who cannot see anything in it means nothing. I do not read English, an English book is a blank book to me. This does not mean that the English language does not exist. Why should I blame anyone but myself if I cannot understand what I know nothing about?”

One of the first artists to have dabbled in the use of methods and concepts that would later be considered pillars of Cubist ideology is Paul Cezanne (1839-1906). In the late 19th century, Cezanne began to paint certain subjects and scenes in a way that depicted multiple perspectives regarding the same central image.

This method was not very well understood during this time and many art critics viewed Cezanne’s warped depictions as errors on behalf of the artist himself as he tried to paint scenes that might otherwise be seen as common Realist works.

Later in his life, Cezanne abandoned the conventional way of portraying the world around him and embraced a new, curious manner of painting that involved reaching deep into the mind of the artist to draw out different perspectives that he believed were not being appreciated by the viewer in the ways that they should.

Cezanne started to paint in a new manner that did not include depth outside of the central subject which was often a basket of fruit, musical instruments, or other simple items that he worked to bring new life into the subject.

What is Analytical Cubism?

Analytical Cubism is mainly an art method that highlights an artist’s ability to deconstruct a particular subject and bring many different viewpoints and perspectives together in a way that presents the subject to the viewer once again. This forces the viewer to consider these new viewpoints and to “analyze” them all at once in a way that inspires a greater appreciation for these items.

As the style of Cubism began to grow and evolve, there were few artists who maintained a similar method of portraying objects while others had vastly different methods of painting that were still considered to be part of the Cubist way of expressing their own interpretations of a given subject.

Many art historians, critics, and enthusiasts hold the belief that Analytical Cubism involves the artist’s efforts of depicting a given subject using geometric shapes to represent a certain item in their works.

The Analytical Cubism movement started to catch hold of the art world in 1907 and is considered to have reached its peak a few years later, lasting until roughly 1912 before the style gave way to other types of art.

What is Synthetic Cubism?

Synthetic Cubism puts more focus on the coloration of a particular image and reconstructing a subject in ways that enhance images in a collective manner that is often two-dimensional. While most other Cubist paintings depicted real or natural subjects, Synthetic Cubism is more focused on the imitation of the subject or item in focus through means of more vibrant colors and contrasting hues.

Synthetic Cubism is said to have sprang up out of the Analytical Cubism movement around the year 1912 as more and more artists started to take their own inspirational ideas and perspectives of this particular movement and explore the concept of imitating a subject using unconventional methods.

It is well-known throughout the study of art and its history that Synthetic Cubism is a movement that sprouted off from Analytical Cubism. This new movement occurred around 1912 and was spurred by two of the most famous Cubist painters, Pablo Picasso and George Braque.

Many artists would go on to follow in the footsteps of these two artists as others sought to explore the concept of depicting a subject or item in a way that takes into account not only the various angles and perspectives, but variations of colors that brought out new ways of seeing certain things in a new light.

Both Picasso and Braque painted hundreds of Cubist works between the two artists and through their use of geometric shapes, sharp angles and darkened planes, the artists would seek to continue pushing the commonly accepted boundaries of perspective at the time.

Picasso and Braque brought their works to a new level by discarding the older methods of Cubist brushstrokes and the idea of three-dimensional object in favor of embracing the two-dimensional canvas and its ability to portray a more simplistic manner of characteristics that included brighter hues, simple shapes, and less background depth than before.

Picasso is regarded as the father of Cubism by many art historians and critics as he was one of the most notable artists of the time who challenged the commonly accepted forms of expression and perspective.

His series titled “Guitar” is widely considered to be the most prominent example of a single artist transitioning from Analytical Cubism to Synthetic Cubism throughout the course of a year or so.

One of the most notable differences in Picasso’s paintings was the artist’s abandonment of depth in his paintings. As he began to paint in a style that disregarded the view of three-dimensional objects, he increasingly painted items that adhered to a more simple, flatter approach that was distinctly two-dimensional.

Transition from Analytic to Synthetic Cubism

One of the first and most notable differences many viewers recognize between the two art styles is the lack of vibrant and bright colors in Analytical Cubism. As many artists during the movement sought to delve more into subjects and new perspectives through the use of various shapes and sloping planes, there was a significant lack of warmth in the coloration of these works.

Many of Picasso and Braque’s early works in the Analytical Cubism style were clearly devoted to the changing perspectives and exploring the many different presentations regarding one single object. However, the artists would later transition into a style that is considered Synthetic Cubism and would return to painting bright and bold colors that provided new definition to objects on an otherwise bland canvas.

The color palette of Picasso’s Synthetic Cubist works are distinctly brighter than his earlier works, yet the subjects are presented in a more simplified, two-dimensional manner that is sometimes considered to be devoid of the depth in perspective that the artist chose to work with in his paintings from just a few year prior.

Bold colors would be a hallmark of the Synthetic Cubism movement as artists like Picasso would work in contrasting and complimenting dashes of blue, green, red, and yellow hues. Many art historians can usually spot a Picasso painting from the Synthetic Cubism movement simply from recognizing the artist’s incorporation of bright, striking yellow colors that dominated the canvas.

Both Braque and Picasso would continue to work in a manner that utilized a collage style of painting and would sometimes paste actual sheet music into their canvas when working on a painting that centered around musical instruments.

Juan Gris was another artist that worked in the Cubism movement and produced some of the most iconic works from the style long after Picasso and Braque had begun the movement in the early 20th century.

Gris’ works centered around the horrors of the first World War as the artist was caught in the middle of the conflict in his native Spain. His paintings are largely viewed as some of the best Synthetic Cubism works ever produced.

He painted scenes of individuals involved in the violent clashes of World War I in giant canvases that included depictions of both soldiers and civilians, focusing on the effects the war had on everyone and everything.

He also painted one of the most famous cubist potraits of Picasso titled “Portrait of Picasso” that impressed Picasso so much he was somewhat intimidated of Gris’s talent.

His works were notably two-dimensional and employed a significant number of vibrant colors that included white and black that was meant to portray the fine line between life and death in which everyone involved in the conflict was continually in contact with.

More than a hundred years after the birth of both Analytical and Synthetic Cubism, both styles of painting remain popular with modern artists much in the same manner in which the earliest Cubist artists produced their own works.

Modern Analytical Cubism painters continue to work with subjects that are placed at the center of the canvas and painted in a way that depicts a wide variation of perspectives using different geometric shapes and less incorporation of color.

Analytical Cubism works from the latter portion of the 20th century are similar to the older works of the founding members of the movement as artists continue to utilize shadows and sharp angled shapes to emphasize the different appearances of a single object.

Artists also continue to work in the Synthetic Cubism style, which has been highly influential in a number of different eras throughout the 20th century. The use of bright, vivid colors and simplified subjects on a canvas are being explored even further thanks to advancements in technology and computer animation.

It is likely that these two types of Cubism will continue to be influential genres of art that inspire more artists to delve deeper into the many ways our world can be portrayed.