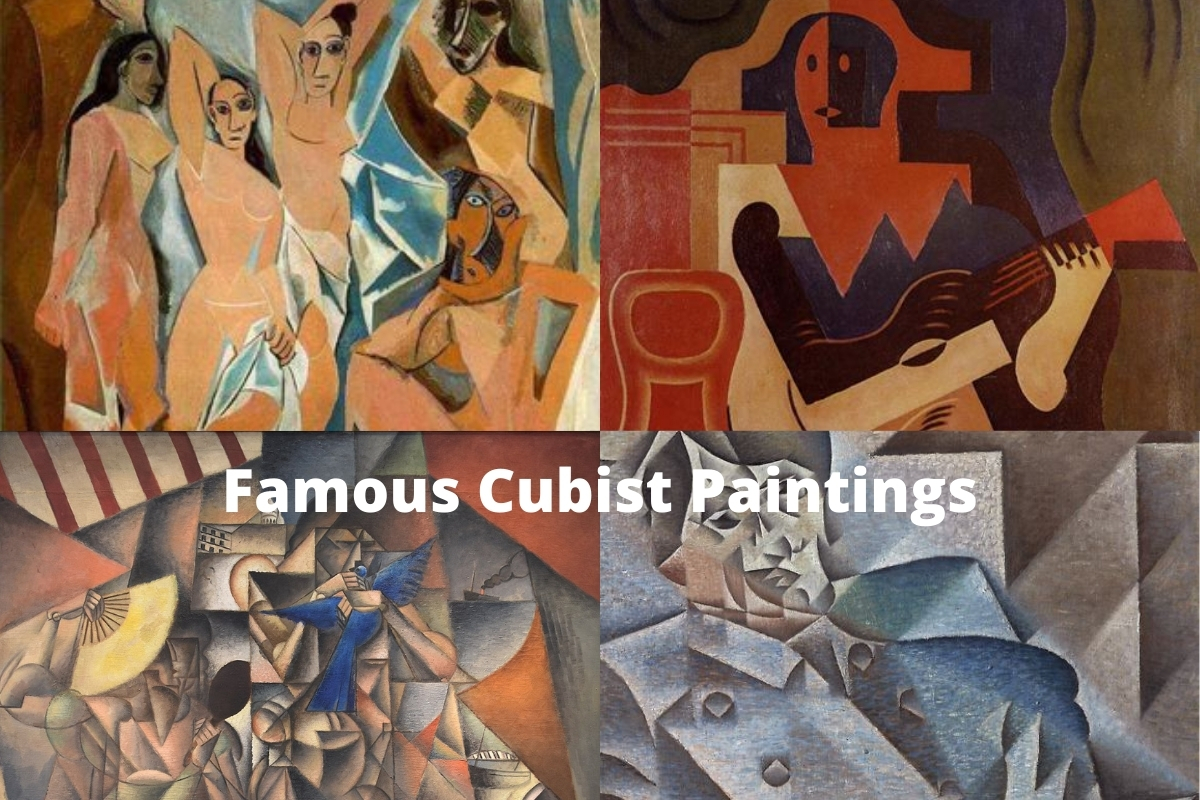 Cubism is an art movement that drastically changed the international landscape of art and has also likely created the most influence on the modern art styles of today. The overall impact of cubism has reached farther than painting and deep into sculpture, as well as modern architecture and other forms of design.

Cubism began roughly at the start of the 20th century as painters dabbled with various geometric shapes that were aimed at creating a new, unique way of achieving three-dimensional works of art. Some of the most famous painters of the Cubism movement were well-known names like Pablo Picasso, Paul Cézanne, and Georges Braque.

Pablo Picasso is perhaps the most famous painter of the 20th century with a number of popular works that are widely considered to be masterpieces—especially in the cubist style of painting.

His work titled Les Demoiselles d’Avignon is among the most recognizable paintings in the cubism style and was originally known as The Brothel of Avignon.

However, the striking image of five naked women was not likely to be well received in 1907 Spain, prompting him to slightly alter its name to a more appropriate option.

The work features sharp angled images of five women whose faces appear to be strangely familiar to those among artwork from Africa. The painting’s composition is well balanced with a high level of contrast between vibrant red and blue colors on either side of the canvas.

Picasso employed the use of irregular geometric shapes to portray the human form in a way that was drastically different from most other artists who relied heavily on producing paintings that were as realistic as possible.

His unique style earned him a healthy reputation among art lovers and critics of the day and would lead him down the path of further exploration in the new and captivating genre of cubism.

2. Woman with a Mandolin – Georges Braque

Georges Braque began to venture into the realm of cubism in the early 1900’s, painting the work titled Woman with a Mandolin in 1910.

Braque was especially interested in artwork which featured subjects and musical instruments as the two mediums of art and music are closely related in their ability to evoke emotion from humans.

In this work, the artist combines an interesting level of vertical and horizontal lines to create the figure of a woman. The shadowy geometric shapes and combinations are painted with a variety of grey and darker ochres that seem to draw the viewer in curiously closer to the woman as she is portrayed strumming the mandolin.

Many art critics see the mandolin as largely symbolic and representative of a woman’s womb.

Many cubist artists chose to use a harlequin, or a figure who can be closely compared to a pantomime that originated from 16th century theater, in their works.

Juan Gris employed one such subject in his work titled Harlequin with Guitar which is among the most famous cubist paintings in history.

The harlequin is easily recognizable as Gris depicts him wearing a traditional checker-patterned costume, and is viewed as a whimsical character that’s both attractive and unpredictable.

Painted in 1917, Gris would later delve deep into the use of harlequins in his works of cubist art, creating more than 40 works of similar nature throughout much of the next decade.

The painting is known for the use of sharp, angling linear shapes that seem to make up the seated harlequin’s figure. Gris’ use of varying shades adds a deeper level of detail to this painting and is one of the most easily recognized works in the genre of cubism.

Many artists in the 20th century drew inspiration from the ever-changing world around them, especially those who were caught up in the horrors of war. Pablo Picasso devoted dozens of works to the events that transpired during the Spanish Civil War in which the country was forever changed by seemingly unending bloodshed.

Completed in 1937, his work titled Guernica was immediately famous as one of the most unique and stark depictions of the war. The painting shows various figures who are all affected by the terrible events of the fighting that raged on during the time in which Picasso painted the masterpiece.

It is featured on a giant canvas, which further creates a sense of overwhelming death and destruction in the viewer by Picasso’s use of grey and black colors.

Few artists were able to accomplish as much captivating portrayals of reality through cubism as Jean Metzinger. His work titled The Blue Bird was painted on a large canvas and featured varying levels of shaded figures that draws the viewer into an otherworldly sense of reality. Metzinger painted the L’Oiseau bleu, as it is known in France, as a pursuit of higher levels of being.

The painting incorporates shapes that are combined on a mathematical level of genius, as well as Riemannian geometry that comes together to create an exceptionally vibrant scene of cubist mastery.

Many art critics and enthusiasts agree that the painting is the most easily recognizable works done by Metzinger and is a pillar among the greatest cubist artworks in history.

6. Man with a Guitar – Georges Braque

Georges Braque was among the most well known artists who worked in the niche of Analytic Cubism. The art movement originated in the early 20th century thanks to works such as Man with a Guitar, which is said to be among the most influential pieces of cubism done by Braque.

Painted in 1912, the figure of a man and his guitar is noted by many art critics and enthusiasts as being barely recognizable. However, those who appreciate the moving spatial aspects of cubism consider it to be a masterpiece that plays on the human mind much like the way a musician would strum a guitar.

Braque sought to challenge the long-held view that art must adhere to specific shapes and forms, presenting this work as one that challenges the viewer to make sense of the loosely-held shades, angles, and minute details.

Many who look upon this work by Braque note that it seems to be ever-shifting before their eyes, demanding that each aspect be thoroughly inspected to attain the meaning of his work.

Jean Metzinger is among the most famous artists in cubism for her ability to create some of the most iconic paintings associated with the genre. When her cubist portrait titled Tea Time was first displayed, it was dubbed by some of the most well-known critics of the day as “The Mona Lisa of Cubism.”

While other artists in the world of cubism were venturing farther into the depths of evanescence, Metzinger sought to bring new levels of realism to the bustling style that had become so popular through the early 20th century.

Metzinger finds a surprising level of anatomic realism despite the painting being made up of irregular shapes and angles. The subtle use of shades and soft colors create more focus upon the nude female figure, who is seen gazing back at the viewer as she casually sips her teacup.

Juan Gris was hailed as one of the greatest artists in the cubism style for his ability to mend symmetrical shapes and figures with those that were often in sharp contrast to the outline of his subjects.

Gris’ work titled Still Life with Flowers was completed in 1912, during the height of the cubism era, and depicts a glowing and vibrant scene of flowers surrounding a stringed instrument.

This painting was recognized for Gris’ stylistic use of triangles and overlapping planes that combine to form a scene of quiet and humble beauty. This work is among his most famous as it features the brilliant combination of colors the artist had become known for during his career.

Robert de la Fresnaye painted one of the most memorable cubist works, especially among French artists during the time, in 1913. Titled The Conquest of Air, this painting seemed to play upon the expectation that each natural element somehow adheres to a subtle aspect of geometric perfection. The clouds are made up of circular spheres while the ground is depicted as having sharp, somewhat triangular qualities.

De la Fresnaye was heavily influenced by his studies involving the golden ratio and how mathematical proportions play into the appearance of everyday scenes such as the one depicted in his painting.

This painting seems to blend elements of perfection with imperfection in a way that portrays an even combination of man made and natural beauty.

Pablo Picasso is among the most famous cubist artists as he was hailed for his ability to present objects and figures in seemingly solid forms, as well as masterpieces that play on the unreal nature of de-materialization.

Ma Jolie, meaning “my pretty one,” was said by Picasso to reference a popular music-hall song from the era while the true meaning was held back, only known to those close to his circle of friends.

The irregular shapes and dark, brackish colors seem to convey a deeper meaning as the central figure all but disappears into the depths of abstract planes and subtle details.

We hope you have enjoyed this list of famous cubist paintings!