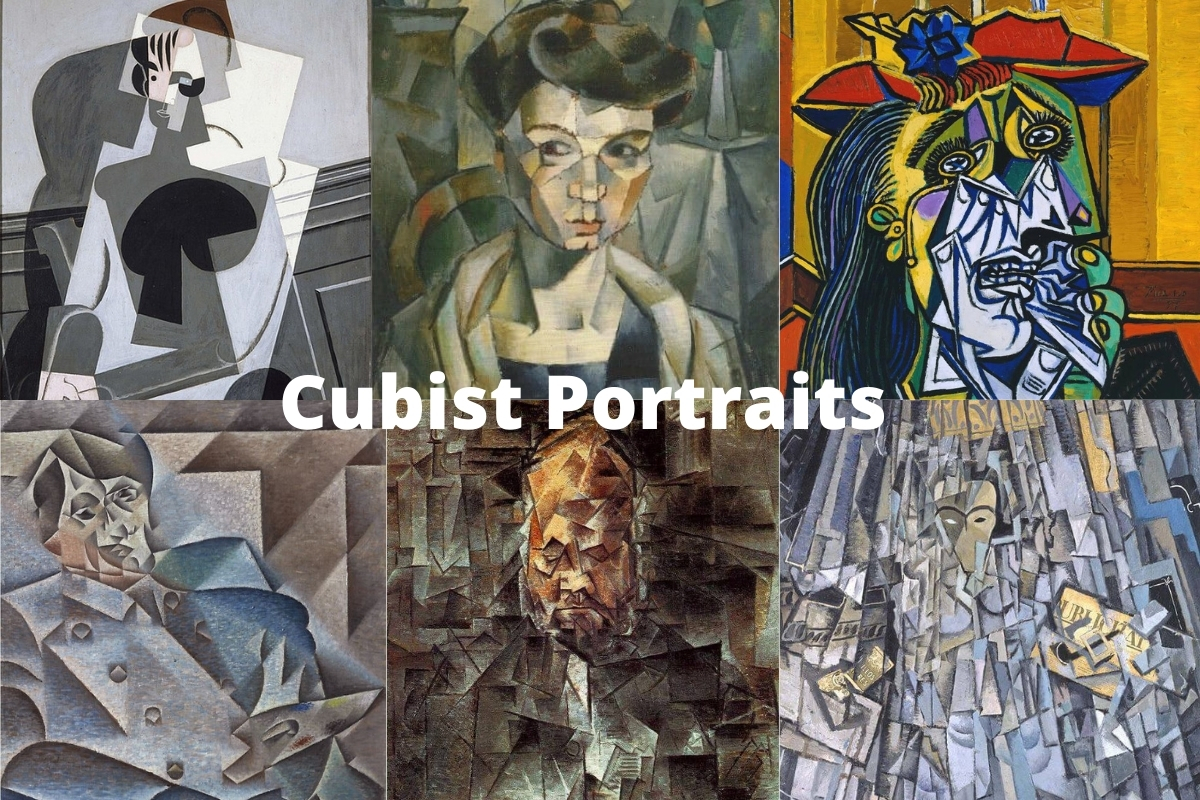 Cubism is an art movement that transformed the manner in which artists expressed themselves during the 20th century. It was aimed at venturing into new and unexplored territory pertaining to depth, perception, as well as the many different dimensions with which a viewer can perceive a single object or scene.

The art movement influenced everything from architecture to music and had profound, lasting impacts on the world of art as a whole.

While Cubism might be looked at with skepticism by the casual art enthusiast, those with deeper backgrounds in the field of art are able to appreciate the extent to which Cubist artists worked to portray a single object, person, or scene in a wide array of perspectives that are combined into one single work.

Cubist portraits were especially popular with the movement’s most prominent artists as the 20th century progressed.

While other art styles and movements sought to depict the human form in a more realistic detail, Cubist painters focused on the geometric congruence that could be found in the face and posture of an individual.

Pablo Picasso was widely considered to be one of the founding fathers of the Cubist movement. He developed close friendships with other painters from the period, including Georges Braque and Juan Gris.

During the early years at the beginning of the 20th century, Gris described himself to art critics and enthusiasts as “Picasso’s disciple,” noting that he greatly valued the new innovative style that Picasso had helped make so famous during the early 1900’s.

Gris is credited with painting one of the most famous Cubist portraits from the time period in his work titled Portrait of Picasso. Painted in 1912, the artist worked to portray Picasso in a way that saw the famous artist as a combination of simple geometric shapes.

Picasso is seen reclining in a chair, donning a blue overcoat and calm expression. Gris wanted to pay homage to his mentor and did so by painting him with a paint palette in hand.

He is said to have captured Picasso’s calm, relaxed demeanor by using a combination of cool, blue hues throughout the entirety of the work.

2. Man with a Guitar – Georges Braque

Georges Braque is noted as one of the most famous artists of the Cubist movement and many argue that his painting titled Man with a Guitar is arguably the most iconic work of the entire era.

Many art critics and historians claim that much of this painting borders along what should be considered Analytic Cubism, but it is nevertheless agreed upon as being one of the most famous Cubist portraits ever created.

Painted in 1912, during the height of the Cubist movement’ ascension in European popularity, this portrait features the figure of a man holding a guitar.

Braque had developed a reputation as an artist that pushed the boundaries of what is commonly considered to be aesthetically pleasing in order to achieve a greater work that depicts the same image in a number of different perspectives and angles.

This portrait is one that depicts the same simple portrait in a way that presents the viewer with a number of different perspectives using various geometric components.

The darker coloration of the work is part of the reason why this painting is considered to be one of the most recognizable of the Cubist movement.

Salvador Dali is hailed as one of the most famous artists of the 20th century as he is well-known for his Surrealist works and ideas. He also delved into the Cubist arena during the early 1920’s and created what many consider to be a masterful work of Cubist expression.

His painting titled Cubist Self-Portrait, 1923 is one that is regarded as a famous work that helped further shape the Cubist movement in the mainstream art scene of the early 20th century.

This work depicts Dali himself as a collection of fragmented, mirror-like shards that combine to give the impression of various elements of his own appearance.

It is noted by art critics and historians that Dali seemed to have incorporated aspects that are drawn from African tribal art, as well as other areas.

Pablo Picasso is credited as being one of the most influential artists of the Cubist movement through the early 20th century. He created several portrait paintings that have become known as some of the most iconic works of the era.

Picasso painted one of his most famous portraits in 1910, which focused on the famous art collector, Wilhelm Uhde.

In his 1910 work titled Portrait of Wilhelm Uhde, Picasso depicted the collector in an array of shaded geometric shapes, yet the viewer is still able to clearly see Uhde’s figure in the painting.

The work contains a large amount of subtext, according to various art historians and critics while also expressing the image of Wilhelm Uhde in Picasso’s usual manner of bland colors that were coupled with inexpressive tones throughout the entirety of the canvas.

Jean Metzinger was one of the most well-known French painters of the Cubist movement. He created numerous works that are considered to be among some of the most famous cubist paintings, but his most notable painting is arguably his work titled Portrait of Madame Metzinger.

Metzinger was known as a Renaissance man in French society during the early 1900’s and was praised for his poetry and other written work in addition to his paintings.

His portrait of Madame Metzinger was painted in 1911 and features the woman in the same usual dark coloration that is considered typical of the Cubist movement in so many cases.

Pablo Picasso was known for his often surreal interpretations of various figures that he painted. Later in his life, he began to paint in more vivid colors as a way to further express the emotional significance of the subject, especially as it pertained to portraits such as his painting titled The Weeping Woman, which he painted in 1937.

This particular work features Picasso’s trademarked profile view of the woman’s face while other small elements hint at there being a deeper level of perspective for the viewer to see.

The work largely focuses on the woman’s face, which is portrayed in a wide range of contrasting colors and geometric shapes. Her high level of emotional sadness is further emphasized by Picasso’s use of faint blue colors on her face below the eyes, which seemingly indicates that her face is covered in tears.

Early in his painting career, Georges Braque experimented with a variety of different methods of portraying the human form in such a way that might encapsulate the Cubist form of view.

His 1909 work titled Head Of A Woman, 1909 features a woman’s face and hair shrouded by dark bordering colors and shapes.

Braque was still truly developing his own special brand of Cubism during this period as he painted this particular work shortly after leaving art school.

This work appears to show Braque’s deep connections with Pablo Picasso as it seems to draw on the same type of depiction that represents a woman’s figure using long, stretching shapes. This was one of the first paintings in a long series of works in which Braque portrayed the female form using various elements of Cubism.

This particular work is known for its high level of mystery due to Braque’s use of darker, more hidden tones of deep blue and black.

Many art critics argue that the color choices of this particular work are directly tied to the dark, dirty colors often associated with the Industrial Revolution that was sweeping the developed world at this time.

During what many consider to be the early height of Pablo Picasso’s career, he traveled to Barcelona, Spain with fellow artist Fernande Olivier.

The events of his travels had a large impact on his overall style as many of his works after this period seem to have more of a flair about them which many art historians and critics deem to be distinctly tied to Barcelona’s highly unique culture and architecture.

Picasso painted one of his most famous Cubist portraits, titled Femme Assise, 1909. This particular painting features a beautiful woman draped with geometric shapes which represent her hair and figure.

This single painting is credited as one of the highlights of Picasso’s career as it represented a breakthrough in how he represented human form.

Juan Gris focused his efforts on the female form for many years in his career as an artist. In 1916, the movement known as Synthetic Cubism was just taking shape and many art critics were fixated on Gris’ use of rounded shapes and multiple planes to represent a single figure.

His 1916 work titled Portrait of Josette,1916 is among the most famous Cubist portraits ever done as it incorporates many of the emerging elements of the new variation in Cubism.

Gris depicted the woman using mostly black and white colors on a variety of levels. The woman appears to be seated in a chair, her legs folded on top of one another and her hands clasped together.

This particular work has many elements that can be traced back to the influences of Cezanne and Corot, but many art critics and historians view this as one of his greatest masterpieces involving human form.

Ambroise Vollard is regarded as one of the most well-known art collectors of the early 20th century. He was someone that Pablo Picasso knew well and is the focus of one of the artist’s most famous Cubist portraits ever created which is titled Portrait de Ambroise Vollard.

Created in 1910, Picasso used a variety of unique elements to combine to create a true masterpiece in the style of Cubism.

This painting features a distinctive figure, which clearly represents Vollard, who was known to have a balding head, as well as a neatly kempt beard.

Picasso painted the areas outside of Vollard’s figure with various forms of geometric shapes that intertwine to form a background of sorts.

Vollard’s head seems to explode upward while his eyes are seen as being cast downward. Many art critics believe Picasso decided to portray the famous art collector in this manner in an effort to indicate his brilliant mind and ability to distinguish great works of art.