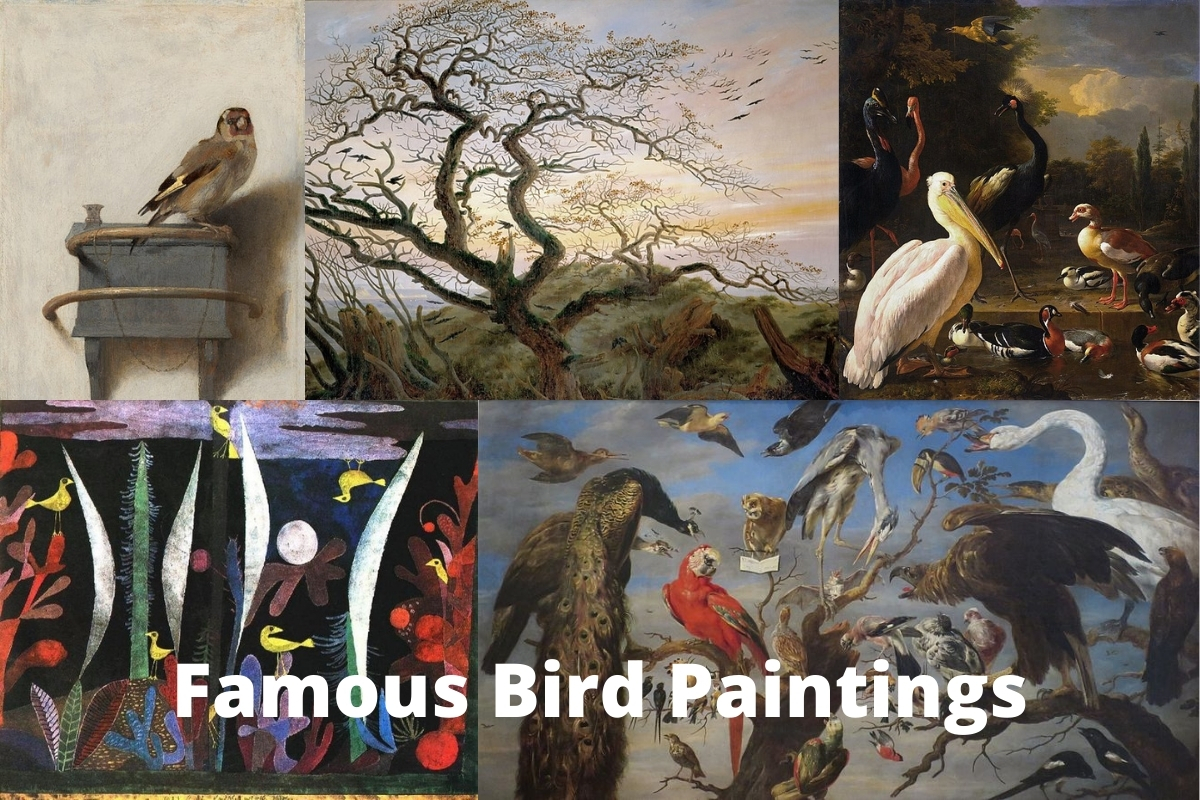 Artists throughout history have held a special affinity for various types of birds and other creatures.

Some of the most famous art movements that have taken place, such as Impressionism, Naturalism, and Romanticism, have seen prominent works of art that have mostly focused on birds.

It’s understandable that many artists would want to focus on animals like birds. They are one of the most colorful of any animal and have a plethora of different species that all have their own unique, vibrant colors.

Many artists are known to have traveled great distances in pursuit of witnessing various natural elements and wildlife for themselves in order to paint beautiful works of art centered around the subject.

In this article, we will discuss some of the most famous bird paintings ever created and take a closer look at just why each artist was inspired to create a work that focused on a certain kind of fowl species.

Carel Fabritius was a prominent artist from the Dutch Golden Age, who had a painting style that was centered around using highly realistic colors and elements in his works.

He is known to have painted a few works that are widely considered to be among some of the most famous from any Dutch artist of that era.

One of his greatest works is titled The Goldfinch. Done in 1654, this painting is a simple, yet elegant depiction of a goldfinch, a species that is common to the Dutch homeland.

In the painting, the bird is seen perched atop a lamp post. The work itself is considered to be highly simplistic with a unique composition for artists during the time period in that region.

The goldfinch species was one that had been painted by various artists throughout the Italian Renaissance as a symbol of Christian redemption. This is likely the theme that Fabritius was looking to exhibit in this particular work.

The painter is said to have been killed by a massive gunpowder explosion in Delft that destroyed much of the city. It is believed that this painting was hanging in his workshop when the blast occurred.

Jean-Léon Gérôme was a famous artist who lived during the 19th century in France. He traveled the Middle East later in his life and was awe-stricken by much of the beauty in the various cultures and architecture of the region.

Gérôme painted one of his greatest masterpieces at some point during his travels.

An exact date on the work titled Harem Women Feeding Pigeons in a Courtyard, but it remains an incredible work in both composition and contrast.

In the painting, there are a handful of women seen feeding a massive flock of pigeons that are swooping into a stone courtyard.

The painting is perhaps more well known for the artist’s use of sunlight beaming in from the open-air courtyard during the middle of the day.

3. Kingfisher by the Waterside – Van Gogh

Vincent Van Gogh was known as one of the greatest artists in history and is still very highly regarded for his creativity, as well as his ability to utilize various colors to capture the essence of plant and animal life.

The 1886 work was one that is considered to be the most famous bird paintings that Van Gogh ever finished in his career.

As is usual for Van Gogh’s work, the painting itself features a set of distinct brushstrokes that comprise a beautiful kingfisher perched at the side of a marsh.

The work is part of a greater series of paintings that Van Gogh did during this era that mostly focused on various types of wildlife and plant fauna in the areas near his home.

4. Peacock, Hen and Cock Pheasant in a Landscape – Tobias Stranover

One of the most iconic paintings that are centered around birds is Tobias Stranover’s famous work titled Peacock, Hen and Cock Pheasant in a Landscape. This painting was one that is a classic version of Baroque artwork from the mid 18th century.

The painting was created in 1756 and features a large peacock, hen and pheasant gathered together in a slightly unnatural manner, but each bird is presented in a form that was very accurate to their actual coloration and demeanor.

Some of the small offspring of each type of bird can also be seen scampering around on the ground below the feet of the adult birds.

The birds are painted with a very high level of detail, which was characteristic of the Baroque time period.

Stranover was said to be among one of the most famous Baroque artists to focus heavily on birds and this work is one of his more notable.

One of the more striking depictions of birds comes from Frans Snyders work that is aptly titled Concert of Birds.

This work was actually one that is characteristic among Flemish artists from the 17th century as many painters would regularly create works which brought together a litany of different bird species in one single work.

These paintings were usually referred to as “concerts of birds.”

This particular painting is believed to have been done in 1640 and features a wide array of some of the most popular and prevalent birds from the Flemish region, as well as other parts of the world.

The birds are seen perched atop the branches of a large tree, with each species having its own particular pose.

Snyders’ work is believed to be among the best examples of these types of paintings that were highly popular during the middle of the 1600’s in this section of Europe.

Another one of the most recognizable paintings that solely focuses on birds is a word done by Melchior d’Hondecoeter.

This is another work that is considered to be in the same style as Snyders’ Concert of Birds as it was completed in 1680, just a few decades after this particular style had become commonplace.

This particular work is known as The Floating Feather and features a wide variety of waterfowl and other species of birds that are generally associated with living in or near watery marshes and wetland areas.

The work was originally exhibited under the name A Pelican and Other Birds Near a Pool, since the main figure seen in this work is a large, white pelican that dominates the foreground of the canvas.

Some paintings that are among what many art historians and critics believed to be some of the most famous bird paintings are not necessarily colorful or intricately detailed.

One such work that goes against the grain of the average type of painting on our list is Caspar David Friedrich’s painting titled The Tree of Crows.

This stark painting is one that is especially bleak and colorless for the most part. Completed in 1822, the work depicts a large, twisted oak tree that is nearly void of leaves.

The work is believed to portray the bleak, and often hopeless outlook that the onset of winter usually offers as there are only a few leaves left on the tree, indicating that it has just gone through the fullness of the autumn season.

Our list of bird paintings wouldn’t be complete without mentioning a notable work by John James Audubon that many art critics and historians consider to be among the greatest ever done by the young artist.

The painting was believed to have been completed sometime in the 1830’s when Audubon was enjoying a visit to the Florida Keys.

His visit inspired him to create a wide range of different paintings that each depicted some of the highly unique creators that roamed the wetland marshes and beach area of the Keys.

This particular work is titled Roseate Spoonbill as the painting prominently features the species observed in what Audubon believed to be its natural habitat.

Some scientists have argued that the posture and positioning of the bird is not consistent with the species’ actual behavior and it is believed that Audubuon painted the bird using a dead specimen, which he only guessed as to what the bird might look like in nature.

Another one of the most iconic bird paintings that many art critics believe to be among one of the greatest works from the early 1900’s is Henri Rousseau’s work that centered around flamingo’s. Completed in 1907, this particular painting was a highlight from Rousseau’s love for the outdoors.

The artist used a colorful combination to portray the water running alongside a vast wetland forest while four flamingo’s wade into the water, likely in search of their next meal.

The river is adorned with majestic lilies and flowering blooms that give even greater amounts of color to a work that is already bustling with a variety of hues.

Paul Klee is widely considered to be among one of the best modern artists since the likes of Vincent Van Gogh. Many of his most notable works are ones that could be classified as Impressionist or even Surrealist paintings.

The latter characterization is likely to be the most accurate description for our final work among our list of bird paintings.

Painted in 1923, a work that is known as one of the most notable ever done by Klee is referred to as Landscape with Yellow Birds.

The painting is quite in line with some of Klee’s other works that leaves the viewer having to piece together the sight before them in order to enjoy and appreciate the subject matter intended by the artist.

The painting itself features a wide variety of birds that are perched atop some of the most colorful plant life one could imagine. Each bird is seen as a golden-colored creature that almost looks out of place in the painting.

This work is said to have inspired a number of other modern artists to continue pushing the bounds of modern artwork in order to depict nature in its purest form.