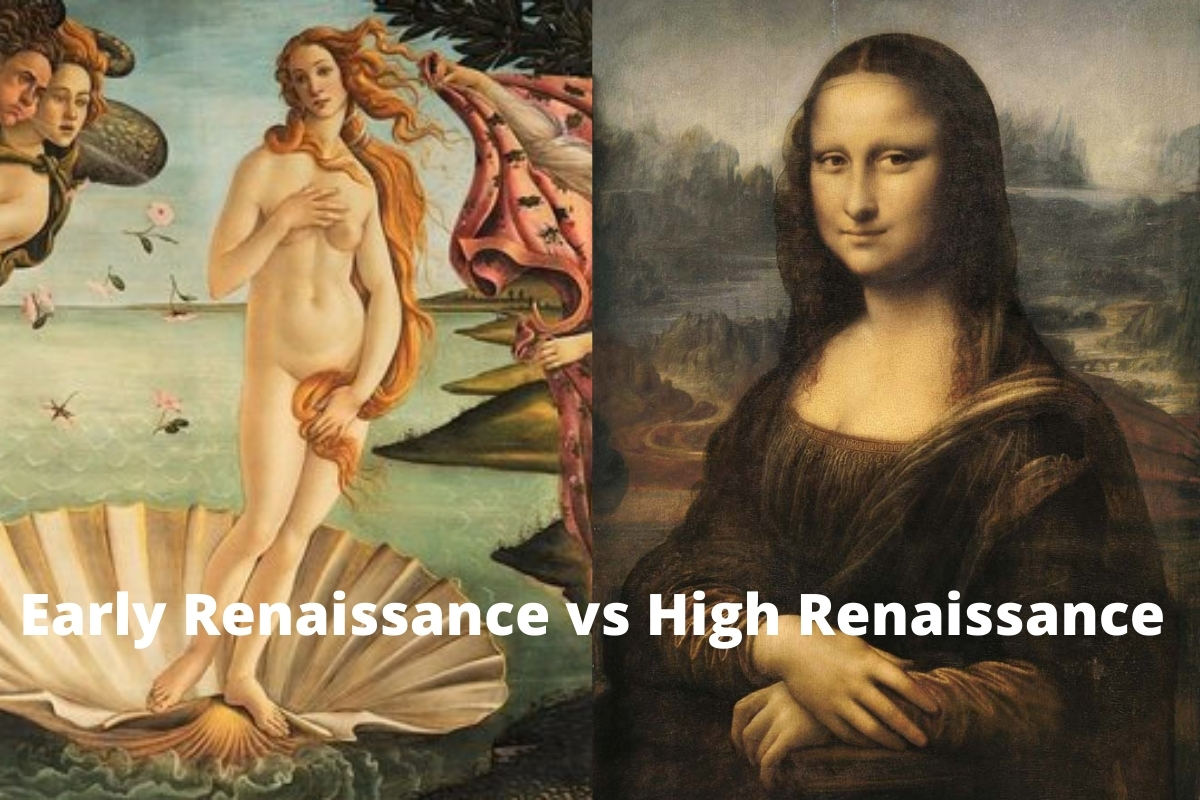 The Renaissance period is considered one of the movements that had the most influence over the many eras that followed after it. The period was aptly-named as the Renaissance virtually means “rebirth.”

Many of the most prominent artists from this time are still regarded as being among the greatest painters of all time.

Despite the common misconception that the Renaissance was one comprehensive movement that lasted well into the 16th century, the movement actually consisted of two different periods that can be divided into the Early Renaissance and the High Renaissance.

Both of these portions of the Renaissance movements have quite a few similarities, but there are some striking differences that can be noticed based on some of the elements used in each era, as well as the focus of paintings.

In this article, we will discuss in greater detail the various characteristics that are considered similar from the Early Renaissance and the High Renaissance.

We will also explain in greater detail what some of the most prominent differences were, as well as how such changes came about from the Early Renaissance to the High Renaissance.

The Early Renaissance originated in Florence, Italy during the 15th century at a time when most artists were heavily-focused on the classical themes involving Greek and Roman influences.

This era was one that began as a stage of enlightenment of the people of Italy and the surrounding area of Europe. The Renaissance’s origin was one that would later affect other parts of Europe and the world as a whole in areas of literature, philosophy, science, and many others.

Early Renaissance painting featured a heavy focus on certain areas of painting like proportion and human expression. Many of the most notable works from this era include paintings that depict mythical figures in grandiose poses wearing exuberant outfits that highlighted their god-like nature.

Artists during this time period worked to produce works that offered a better and more realistic appearance. They put great amounts of emphasis on creating a better sense of three-dimensionality by painting each part of the scenery in great detail.

Many artists were known to spend hours at a time simply observing nature or people in order to gain a better understanding of how each animal looked in proportion to its natural surroundings.

Painters during the Early Renaissance began the period by focusing mostly on Greek and Roman-inspired scenes, but would gradually move towards more religious settings over the course of the movement’s early decades. The Catholic Church’s power over the region was evident and would become even more so as the Early Renaissance continued.

The most famous Early Renaissance paintings portray various scenes that focus on elements like the contrast between light and darkness, as well as realistic proportions and shapes.

This particular time was the first in history in which artists began to pay special attention to the overall level of realism in their paintings. Many of them would work to create paintings that looked as real as possible, even though the subject matter was focused on mythical figures from Roman or even Greek legend.

As the Renaissance movement continued throughout the 15th century, most art historians point to the final years of the 1400’s or the beginning of the 16th century as the opening point of the High Renaissance period.

The High Renaissance truly emerged in Florence and other large, heavily-populated areas that were centered around the Roman Catholic Church’s most prominent cathedrals.

Most art historians and critics say that the High Renaissance lasted only a few short decades, barely 20 years by most estimates. During this time, however, it was evident that artists had taken a much greater interest in religious themes and ideals that one would expect to accompany Christianity.

One likely explanation for this rise in religious paintings was the fact that the churches in Italy controlled a majority of the wealth and this was directly-tied to the increase in the amount of religious artwork that was commissioned by church leaders.

Some historians point to the death of Raphael as the end-point of the High Renaissance period, but it was more likely that it was the sacking of Rome that occurred under Charles V that brought an end to the golden age of art in the once-thriving nation of Italy.

The High Renaissance featured painting and sculpture from artists that are still, to this day, regarded as the most prolific painters and sculptors to have ever lived. Names like Michaelangelo, Raphael, Leonardo Da Vinci, and many others that remain very prominent in the world of art were the main figures of the High Renaissance era.

These artists, and many others during this time, would be the force that transformed Rome into a bustling center for the arts that was unlike anything the world had ever seen up to this point.

As the Early Renaissance period was known for its emphasis on subjects that were overwhelmingly Roman or Greek in nature, the various characteristics that are associated with this era were things like harmony in color, a higher level of realism, and the contrast between light and darkness.

Many of the most famous artists from the Early Renaissance created works that featured higher contrasts between light and darkness as a means to emphasize the variance between good and evil.

Realism was another factor that began in the first portion of the movement and would later take on a more prominent role throughout the latter half of the Renaissance period.

Many Italian Renaissance artists like Michaelanglo, Da Vinci, and Raphael were known to have focused very heavily on the human anatomy, with some artists even studying human cadavers in order to gain a more firm understanding of how the bones looked underneath the body’s skin, as well as other elements that were driven by an incessant need to perfect their artwork even further.

The High Renaissance featured a greater focus on things like bright and vibrant colors, which were used to provide more life to paintings, especially those of religious nature.

This era was also known for the increased use of chiaroscuro, which was the various effects caused by lighting and shading. Other elements that were also prominent in the High Renaissance were perspective and composition.

The differences between both eras are seemingly superficial at first glance, but when one truly studies both the Early Renaissance and the High Renaissance to a further degree, it’s quite evident that the movement was transformed over the course of the 15th century.

The Renaissance period would go on to inspire various periods of enlightenment throughout the world once it had ended.

The ways in which these artists sought to perfect their paintings down to the most minute detail in every facet is part of why so many art critics and historians hold the Renaissance period in such high regard.