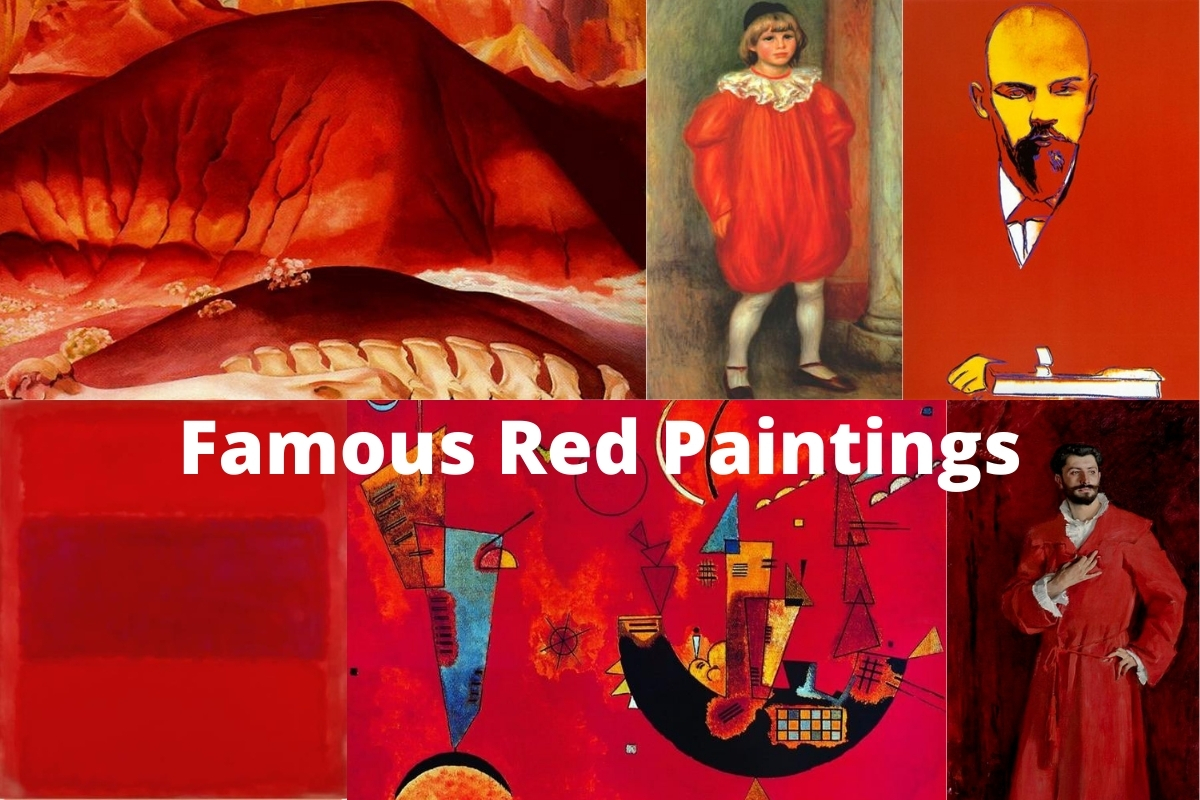 Red is arguably one of the most controversial colors in the entire spectrum. It was one of the first colors that humans managed to perfect the method of reproducing in different hues using red ochre material.

The color has been the symbol of powerful kings and has even been vilified during times like the Protestant Reformation as being associated with sin and evil.

It is one of the most iconic colors that has been used in the most famous masterpieces of all time.

Modern abstract artists have heavily explored the color red and all its variations from deep crimson to the lighter pink shades.

In this article, we will take a closer look at some of the most famous works that involve the color red and discuss what the color represented in these masterpieces.

Georgia O’Keeffe is one of the most famous artists in history who is associated with the American Southwest.

She began her career in the eastern portion of the United States, but moved to the western state of New Mexico later in her life after traveling there.

She developed a deep affinity for the state’s natural beauty, especially the deep red hues of the desert region that was filled with hills and canyons.

One of O’Keeffe’s most famous works is known as Red Hill and Bones. Painted in 1941, this work was representative of the beauty the artist saw in the landscape that many others looked at as a barren wasteland.

The painting features a large red hill that seems to dominate the canvas while a smaller hill is seen in the middle portion of the painting.

The foreground offers a glimpse of bleached bones that seemed to have become a symbol of the region that would later be the focus of many of O’Keeffe’s works.

The bones, with their nearly white coloration, seem to reflect the deep red color of the world around it. This is believed to be a metaphor of how life in the southwestern desert region seems to seep into the people who visit or live in the region.

Mark Rothko is regarded as one of the most prolific abstract artists of the modern era.

Many of his most famous abstract works feature various colors that envelop the whole canvas and force the viewer to behold the color and all its subtle shades.

One of Rothko’s most famous paintings involves the color red in a way that artists before him had never used before.

No. 301, as the painting was known, was created in 1959. The work features two different shades of deep crimson coloration.

The entire canvas is filled with one shade of the deep red color while the center features a single rectangular block that is a darker, more bold reddish hue.

Many of the most well-known art historians and critics say that the true masterpiece is in Rothko’s brushstrokes as the artist used them in many different directions to emphasize certain portions of the work.

Wassily Kandinsky is regarded as one of the most famous Abstract artists from the early 20th century. Many of his most famous works portray various shapes and a wide range of coloration that seems to take on a different meaning for everyone who views them in some cases.

One of Kandinsky’s most famous works features heavy amounts of the color red throughout the entire canvas. The painting, titled Mit Und Gegen, was created in 1929 and is a representation of the artist’s own personal experiences, according to Kandinsky.

The work is highly subjective, but is one that has remained as one of the most famous Abstract paintings of the early 1900’s.

Kandinsky noted that the color red takes on a new meaning when coupled with various other hues. When it’s paired with black, red takes on a more sinister appearance while it becomes a warm, welcoming color when it is used in conjunction with yellow.

Andy Warhol was best known for his distinctive works that featured many iconic figures from the modern world.

Many of his pop art paintings focused on various objects like cans of soup or other household items, but Warhol was known to also paint famous world figures and celebrities as well.

One of his most famous paintings involves the controversial Russian leader Vladimir Lenin. Warhol used a bright, dominating red color in this painting that filled the entire canvas from top to bottom while Lenin’s face and bust seem to appear out of the center of the painting.

During Warhol’s career, Lenin and the idea of Communism were typically associated with the color red and many Americans viewed them as mortal enemies of their own Democratic line of thinking.

This painting has a sense of abrasiveness and is viewed by many art critics as being confrontational for the viewer due to Warhol’s use of the color red.

Pierre-Auguste Renoir is viewed as one of the most notable artists from the Impressionism era that took place during the 19th century in Europe. The French artist worked in portraits of people from his country and their normal, everyday activities.

One of his most famous works is known as Claude Renoir en Clown. Painted in 1909, this work features a young boy, Renoir’s own son, dressed in a flowing red outfit that was the characteristic of a clown figure during this time.

The artist is known to have painted many works featuring his own family and would rarely have them actually pose for a single work.

This painting is known for the artist’s use of the color red as the flowing clown costume worn by his son draws the eye of the viewer directly to it.

The Renaissance artist Raphael is known today as one of the greatest artists of all time. His works were incredibly realistic while offering the viewer a glimpse into 16th century Europe and some of the most important customs and figures of the time.

One of Raphael’s most iconic works is known as Portrait of Tommaso Inghirami and was painted in 1509. This painting features Tommaso Inghirami, who was a friend of the artist and knew him for many years.

The work prominently features Inghirami in his religious garb that was associated with his position in the Catholic church.

Many art historians and critics describe this work as being one of the most realistic paintings from the era. Inghirami’s flowing robes are masterfully painted by the artist and many consider this particular work to be among the most iconic of the Renaissance time period.

John Singer Sargent was known as one of the more prominent artists from the latter half of the Impressionist movement.

The American-born painter traveled to Europe and would later be immersed in the French culture in the late 19th century. One of Sargent’s most famous works, done in 1881, it titled Dr Pozzi at Home.

This painting features Dr. Samuel-Jean Pozzi who offered revolutionary new practices in the field of gynecology.

Sargent was a close friend of Dr. Pozzi and this work emphasizes the high esteem with which Sargent held his friend in.

There are few French Impressionist painters who are as well known as Claude Monet. His works feature scenes from his life that were painted in a way that uses color like no other artist from the time period.

One of Monet’s most famous works is titled Madame Monet in a Japanese Kimono. Created in 1876, this painting features Monet’s first wife, Camille Doncieux, dressed in a beautifully-decorated Japanese Kimono.

The artist had a masterful command over the flowing garment and it is considered to be one of his most famous paintings from his private life.

This painting is famous for Madame Monet’s soft, playful expression as she displays the majestic kimono that was considered to be traditional Japanese garments worn by women during this time period from the region.

Thomas Gainsborough is a British artist who lived in the mid-18th century and painted a number of works that are highly regarded from the Romanticism era.

One of his most famous paintings, a portrait of an influential art connoisseur, engineer, and inventor, was done in 1782.

Merlin is pictured holding one of his notable inventions and is dressed in a bold, stylish red jacket that was the type which was commonly worn by those in nobility from this time period.

The painting is done in the classic style of warm, realistic glow that so often typified many Romanticism paintings. This glow also helped to bring the viewer’s focus toward the center of the painting and more onto Merlin’s iconic coat.

John Constable was famous for his landscape paintings that typically featured the British countryside that he called home.

His works captured various scenes from early 19th century Britain around the area of Suffolk, where he lived as a child. His most famous paintings featured various scenes that included farmers and their day-to-day activities as they worked the land.

One of Constable’s most famous works, however, was the portrait of Captain Richard Gubbins. Constable painted this work in 1805 and the subject, Captain Gubbins, is seen seated and posed in a way that highlighted the appearance of British nobles from this time period.

Constable used striking elements in the background of the painting that seem to further bring attention to the distinctive red coat worn by his subject.

This work is considered to be one of the most famous red paintings as the coloration of Gubbin’s coat seems to have a commanding presence in the eye of the viewer.