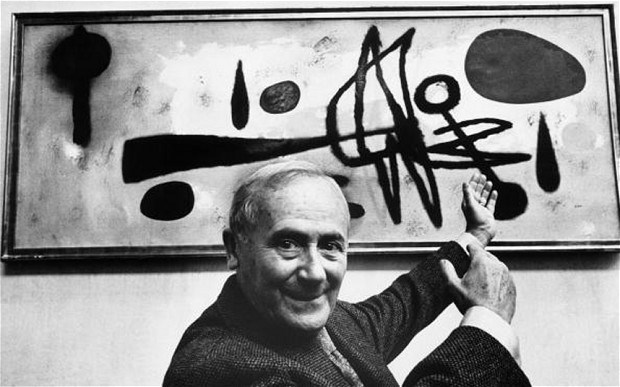 Joan Miro was a Spanish artist who combined Surrealist fantasy with abstract art.

His unique and mature style evolved from the tension between his imagination, vision of modern life’s harshness, and poetic impulse.

He also worked mainly on Lithography and created several tapestries, Murals, and sculptures for public spaces. His highly personalized visual language originated from natural sources as well as prehistoric.

Often considered one of the leading abstract artists he is also thought of as a minor lesser known member of the surrealist artists.

This biography tries to outline his life from childhood to his career development, work, and the factors that inspired his imaginative work across various mediums.

Joan Miro was born in Montroig Barcelona, Spain, on April 20, 1893, as the firstborn son of Micheal Miro Adziras and Dolores Ferra.

He was from a long line of hardworking artisans, and his father worked as a watchmaker and goldsmith. Although Miro wasn’t good at schoolwork, he regularly drew from the age of eight.

Coming from a Catalan heritage, Miro got encouragement from his parents to hold cultural interests. In 1907, he attended the Lonja School of Fine Arts in Barcelona and received more motivation from his teachers.

After attending a commercial college, he later worked as a clerk in an office until he underwent a physical and mental breakdown.

His parents bought an estate in Montroig near Tarragona in 1912 and took him there for convalescence. They also allowed him to attend art school in Barcelona, where his teacher Fransisco Glin advised him to stick to subjects that he liked to draw.

This changed and strengthened Miro’s feelings for the spatial quality of objects. As he recovered, Miro concentrated entirely on art and eventually abandoned his commercial pursuits.

In the art academy in Barcelona, Miro learned both contemporary Catalan poets and art movements. Poetry had a lifelong influence in him, where he saw his work as an implicit metaphor that revoked resemblance to the objective reality, while still managing to stay out of it.

During his training, his teacher had him draw while blindfolded so that he could rely on touch and intuition to encourage spatial understanding of various objects .

Between 1912 and 1920, Miro spent most of his time painting portraits, landscapes, and nudes in a Catalan Fauvism style.

The early 1920s were quite critical in Miro’s life as he moved to Paris. This decision was prompted by the fact that his first solo show in 1918 didn’t go well.

Both the public and critics ridiculed his work, and not a single piece was bought. The disappointment sent Miro to pack and go out to find a more receptive and invigorating artistic world.

He traveled to Paris in 1920 and met several other artists like Pablo Picasso, Max Jacob, Tristan Tzara, and Andre Masson.

It was until his three and a half months stay in Paris that he decided to go back to his Catalan community, where he got his breakthrough, something he referred to as ‘bursting into painting like the way a child burst into tears.’

In the following years, Miro maintained a good balance between his Parisian art and Catalan inspiration.

From 1919, he lived alternately in Paris and Spain. Despite being nominated as a French national, Miro remained attached to his Catalan homeland.

In the 1920s, Miro focused on meticulously detailed realism with abstraction in landscapes such as the Tilled Field and the farm.

He would gradually remove objects he portrayed from their unique context and reassemble them in accordance with specific mysterious grammar, creating an eerie impression.

He enjoyed sharing his thoughts with like-minded artists. From 1925 to 1928, he worked closely under Surrealist, Dadaist, and Paul Klee.

He painted imaginary landscapes and dream pictures where the linear configurations and patches of color looked as though they were set down randomly. He used human and animal figures as indeterminate forms.

After a short time living in Paris, Joan Miro made it a routine to stay in the city during Winter, Autumn, and Spring and then return to his family home in Montroig each summer.

This offered him a good balance of influences while also allowing him to rest from the busy and hectic city life for several months every year while still maintaining a strong connection with the capital that saw his career develop and move at the right pace and direction.

In his early years settling in Paris, Miro faced a number of financial challenges that he used to find inspiration from. He wasn’t bothered by these challenges and only used them to appreciate his opportunity to pursue his dreams in a world where his modern art styles were more receptive.

In 1928, Miro traveled to the Netherlands, where he learned the 17th-century Dutch realist painters. By the 1930s, Miro had already executed a series of old master paintings and had become more experimental, using techniques of collage and sculptural assemblies.

Miro returned to Spain during world war II, where he executed a series of small works with symbols of cosmos and elements, expressing a happy collaboration of everything that is creative.

After the end of world war II, in 1948, Miro again split his time to live in Paris and Spain, and in that year, he began a series of very poetic work based on a combination of themes of a bird, woman, and star.

Between 1949 and 1950, Miro created abstract paintings that became wildly spontaneous while still portraying others with punctilious craftsmanship.

The years following World war II, Miro became internationally known for his drawings, sculptures, and paintings exhibited in many countries. He would get commissioned to paint a wide range of murals across Paris, Spain and the world.

As he aged, Miro continued to receive public commissions and accolades. He went to different directions to find something to add to his skills and knowledge.

He received an honorary degree from the University of Barcelona in 1979 as he continued to demonstrate his achievements and his place in popular culture.

Even at his age, Miro continued to embrace the modern culture and was much interested in the lives of younger generations, to help him find out what the future held.

Like all other great artists, he would continue working until his death in 1983, a year after completing Woman and Bird, public sculpture for Barcelona City.