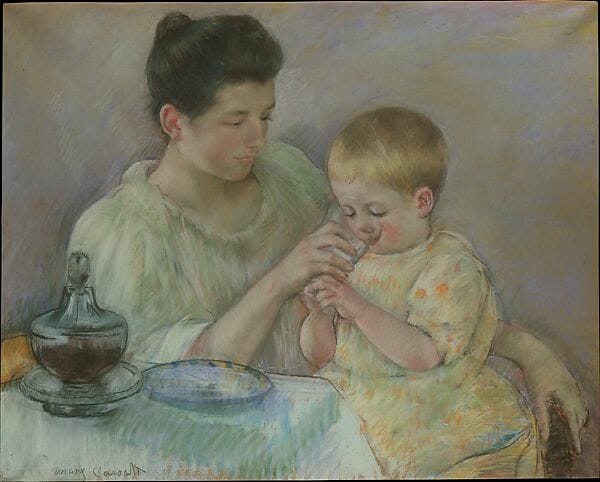 This piece is dedicated to Mary Cassatt. Described by Gustave Geffroy as one of the three great ladies of impressionism (Lestroisgrande dames), her work was compared to Degas.

They were both known to depict light, design, and movement in the most contemporary sense and profoundly impacted the history of modern art.

Impressionist art has dominated the world of art for almost 150 years. Impressionism has played an essential role in modern art style.

Artists that prescribe to this discipline try to capture the ‘impression’ of the light, object, and atmosphere rather than the reflection of real life. The aesthetics of the paintings is one of a kind with captivating canvases.

Artists, such as Claude Monet, Auguste Renoir, and Camille Pissarro, have been hailed as the most famous impressionists across the art world. However, many people have overlooked the incredibly talented female impressionist artists.

“I am Independent! I can live alone and I love to work.”

Mary Stevenson Cassatt was born into a prosperous upper-middle-class family. Her father was a stockbroker, and her mother came from a banking family.

They resided in Germany and France between 1851 and 1855. Mary was exposed to European art and culture at an early age.

She learned German and French. Little did she know these language skills would serve her career well in the later stage of her life.

Not much is known about her childhood, but historical account states that she may have visited Paris World’s Fair in 1855 and viewed the artworks of Jean-Baptiste-Camille Corot, Gustave Courbet, Jean-Auguste-Dominique, and Eugene Delacroix.

At the age of 16, Mary Cassatt began her studies at the Pennsylvania Academy of the Fine Arts in 1860. After five years, she tried to convince her parents to let her continue her studies abroad.

After the initial misgivings, they couldn’t help but agree; then, she moved to Paris to study with Jean-Leon Gerome.

She returned to the United States for a brief period between 1870 and 1871. Disappointed with the lack of opportunities and artistic resources in the art world, she again traveled to Paris.

She also went to Italy, Holland, and Spain to familiarize herself with the work of artists such as Peter Paul Rubens, Antonio da Corregio, and Deigo Velazquez.

Her notable artwork mostly was paintings of women and their daily lives. Her work was a beautiful depiction of what women did with their time in those days. Some of her famous works are:

This artwork was part one of her very first exhibition held in 1874. Mary Cassatt’s work so moved Hilaire-Germain-Edgar Degas at the Salon that after a couple of years, he asked her to showcase her work at an exhibition alongside other exhibitionists. She was the one American in the art circle.

In her painting, Woman reading Mary focused on the everyday lives of middle-class women, such as welcoming friends for tea, reading, answering letters.

The art critics of those times found her work refreshing and demonstrative of her ability to work wonderfully with colors and the subject.

In such paintings, an observation of accidental gestures made the scenes look fresh and new. In Five O’Clock by Mary Cassatt, two women appear to be gazing at something to their right side.

It looks as if they are staring at something or someone that is out of frame or beyond the canvas. The guest is wearing her gloves and hat and taking a sip of tea, which covers half of her face.

Some of the other artwork by Mary Cassatt are:

Despite the discouragement faced by women of her time to pursue a career, Mary Cassatt enrolled in an academic institute at the tender age of 16. As expected, she was patronized and resented by male fellow students.

She also became frustrated with the inadequate courses and slow-paced work. She decided to leave the academy and moved to Europe to learn the works of arts by veteran artists firsthand. Despite her father’s stern objections, she traveled to Paris in 1866.

She took private art lessons in the Louvre and continued to study relative obscurity for two years. In 1868 one of her paintings was selected at the Prestigious Paris Salon, an exhibition run annually by the French Government.

Mary Cassatt was the ‘New Woman’ of the 19th century. She was a highly trained and successful artist of her time, who never felt the need to get married.

She initiated the creation of the image of a ‘new woman’ mostly inspired by her mother, who believed women should be educated, socially active, and possess profound knowledge about the world, much like their male counterparts. Her mother, Katherine Cassatt, is depicted in ‘Reading ‘Le Figaro’ (1878).

Although she did not make any political statements about women’s role in society, her artistic portrayal of women was done to suggest a meaningful inner life.

She became proficient in pastel painting and created most of her artwork using this medium. Degas taught her etching, and they both worked together for a while. She gained a considerable amount of artistic knowledge and strength under his mentor-ship.

In her late years, Mary Cassatt witnessed the emergence of the modern art style in the United States and Europe. However, her style remained the same.

She is considered the most notable Female American artists of the 1800s, along with James McNeill Whistler and Singer Sargent. She has been an influence on many female artists. Her work has been discussed by feminist art historians Linda Nochlin and Griselda Pollock.

Mary Cassatt’s public legacy is her influence on Americans who collected her artwork and displayed it in the museums. One example was Louisine Elder Havemeyer, an impressionist art collector whose collection was displayed at the Metropolitan Museum of Art in New York.