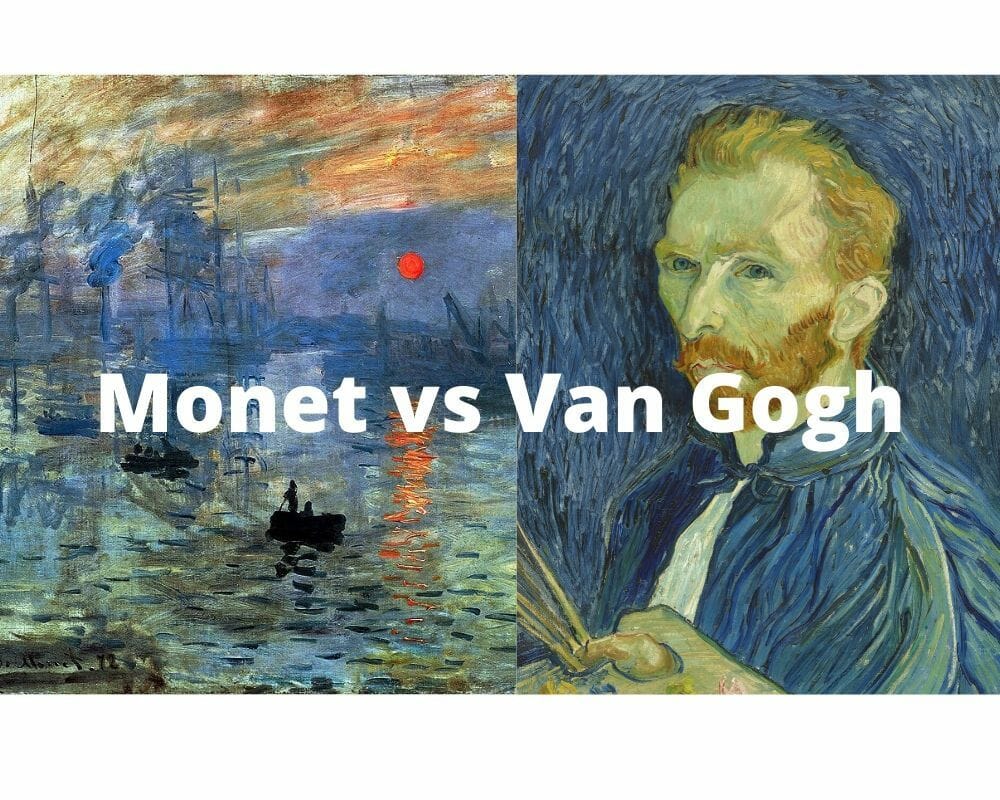 The discussion of Monet vs Van Gogh often comes up and for a lot of people the difference between the two artists is not always apparent.

Van Gogh can be considered a post-impressionist artists whereas Monet is one of the founding members of the impressionism movement.

Both artists made extensive use of light and it’s effects on the color of their subject matter and the spaces and objects contained within.

Claude Monet was known for more realistic use of color tone in his works while Vincent Van Gogh is better known for far more bold and striking color choices.

This in essence is one of the marked differences between the impressionist and post-impressionists.

Impressionism uses color to represent an impression of a landscape and the effects of light on it, whereas the post-impressionists used color to convey emotion.

The main differences between Monet vs Van Gogh is that Monet is strictly an impressionist, Van Gogh however is a post-impressionist artist.

Van Gogh’s early style of painting was was based on a more muted Dutch inspired palette and was in striking contrast to his later works where bold colors were used as a expression of emotion.

Claude Monet’s style is resolutely focused on how light affects and interacts on landscapes and the objects contained in them with large masses of color and mostly devoid of any straight lines of the use of pure black pigment.

Throughout his career Monet’s artworks would continue to focus on light and color and almost all of his works are in that hazy impressionist style that his name is so strongly connected to.

Vincent Van Gogh was mostly unaware of impressionism before he spent a couple of years in Paris in and around 1886.

And his earlier work was more realistic in nature, the impressionists rejection of the status quo had a marked affect on Van Gogh and his style changed immeasurably following his two year stink in Paris.

He would later reject pure impressionism and his work evolved into Post-Impressionism were the aim was not to capture the effects of light but to use color as a vehicle to express emotion.

He also painted a considerable amount of portraits and self portraits whereas Monet mostly focused on landscapes and en plein air painting.

In terms of their career Van Gogh started to paint when he was roughly 21 years old while Monet had been painting from a very early age.

Monet attained considerable fame during his life and had considerable financial security later in life which allowed him to purchase the house and land that would later become the focus of his work with such pieces as The Artist’s Garden at Giverny and Water Lilies and Japanese Bridge.

Van Gogh however only achieved recognition after his death and spent most of his life penniless and even spent considerable time in an asylum where he would paint some of his most famous works of art.

What do Monet and Van Gogh Have in Common?

Although their art does differ greatly there are still some similarities between the work of Monet and Van Gogh.

Both artists are known for the landscape paintings with Van Gogh also of great note for his portraits.

They both based a large portion of their techniques on the effects of light on landscapes.

Given that Van Gogh was greatly influenced by the Impressionist artists during his time in Paris there will always be echoes of their style in his work.

A lack of straight lines and traditional linear perspective is common to both artists as too are very definite brush strokes that give an added depth to the paint on the canvas.

Who Started the Impressionist Movement Van Gogh or Monet?

Monet work is largely credited with the start of the Impressionist movement whereas Van Gogh is a post-impressionism artist.

However, technically it is Manet that is the first true impressionist artist, it is Monet’s painting Impression Sunrise that gave the movement it’s name.

You can see how Manet compares to Monet in our other article Manet vs Monet for a more detailed look at both artists.