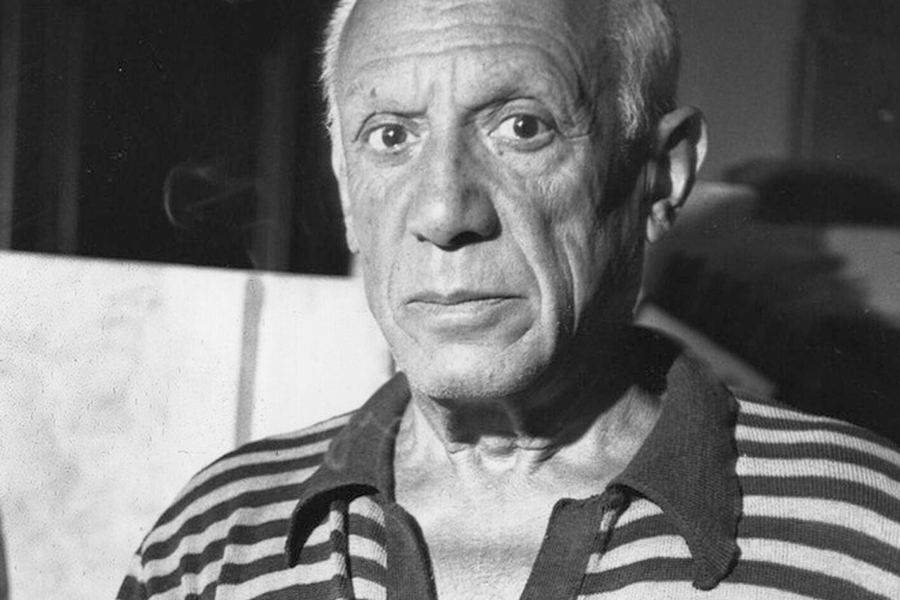 Pablo Picasso was one of the greatest Spanish artists of the 20th century who was famous for being one of the leading artists in the formation of the cubist movement.

He was also a famous sculptor, ceramist, print-maker and stage designer. He was a significant influencer due to his innovative style.

His work matured from the naturalism of his childhood and through his famous movement known as Cubism. His artwork shaped the direction of contemporary and modern art through the decades.

Picasso spent 90% of his years devoting himself to arts and contributed vastly and paralleled modern art’s real growth and development in the 20th century.

Pablo Picasso was born on October 25 in 1881 in Malaga, Spain, to Jose Ruiz Blasco and Dona Maria Picasso Lopez. His father was a painter and art teacher.

Young and world-weary Picasso had a good pair of piercing, watchful and keen black eyes that seemed to mark some greatness in him.

Picasso wasn’t the brightest of the students in his class but displayed a prodigious interest and talent for drawing from a very young age. His first word, ‘piz, piz,’ meaning ‘lapiz’ is a Spanish word that means a pencil.

Picasso’s unusual adeptness for drawing continued manifesting until he was ten when he became his father’s pupil in A Coruna, where his family had moved in 1891.

From there, he began experimenting with what he learned to full passion, and this allowed him to get better quickly and surpassed his father’s abilities.

When they moved to A Coruna, Picasso’s father shelved his own ambitions and focused on his son’s talent, offering him the support and models for his first exhibition when he was only 13.

In 1895, his family moved to Barcelona, Spain and Pablo applied to the city’s prestigious school of Fine arts.

Although the school initially accepted older students, Picasso’s performance in his entry exam was so extraordinary that he was granted an exception and admitted to study there.

Picasso’s young, ambitious mind sent him to skip school on several occasions to roam the streets of Barcelona and sketch a few city scenes.

In 1897, the 16-year-old moved to Madrid to attend the Royal Academy of San Fernando, but he quickly realized that the school did not offer what he wanted as it focused on classical techniques and subjects.

Picasso wanted more. Again, he started skipping classes to wander around the city and paint what he saw. He would visit cafes, streets, brothels and even the museums to look for something to paint.

He fell ill in 1898 and spent most of the remaining year convalescing in the Catalan village of Horta de Ebro in the company of a friend.

When he later returned to Barcelona in 1899, Picasso was a changed person–he had packed weight, and had learned to be independent.

He even spoke Catalan and had developed a preference for his mother’s surname Picasso. He would sign his works as P.R. Picasso. By 1901, he had dropped Ruiz altogether.

It is also during this transition that Pablo took a different route and what would become a lifelong process of innovation and experimentation.

Works and the journey to fame

Picasso had a unique desire for endless experimentation. He also embraced friendship with different modern painters such as Juan Gris who had different paths of painting. Picasso would combine or twist what he learned from them to come up with something extraordinarily unique.

He would switch between styles, reinvent himself and repeat such that his life seemed to be a product of about six great artists.

He didn’t see his style as diverse but insisted that his work was a dedication that involved evaluating every piece and coming up with a technique to achieve the desired effect.

One of the distinct principles in his artistic discoveries was color. His first Barcelona exhibition was in February 1900, and he discovered Paris the same year.

He recorded life in the French capital, such as Lovers in the street.  He paid tributes to Swiss Theophile Alexandre Steinlen and Henri De Toulouse-Lautrec as well as his Catalan companion Ramon Casas.

Between 1901 and 1904, blue was the predominant color in Picasso’s great paintings. He would move back and forth between Paris and Barcelona to get material for his work.

One of his visits to the women’s prison in Paris between 1901 and d1903 offered him free models and compelling subjects, authentic depictions of Barcelona’s blind street people and lonely beggars.

In the spring of 1904, Picasso finally moved to Paris permanently. His mistress, Fernande Olivier, inspired many of his works during the years that led to Cubism, particularly on their trip to Gasol in 1906.

He is credited with being an influential name in both Analytical Cubism and Synthetic Cubism with his ‘guitar’ series of paintings seen as a transition between the two styles.

For Picasso, color wasn’t easy, and he reverted to a general Spanish palette. The blue period was replaced with a rose period. From there, Picasso’s works were categorized as the classical period, a short return to realism and a career that was dominated by experimentation.

As he grew older, he grew more somber and was preoccupied with the deprivation reality. By the end of World war II, Picasso had already shifted his eyes to politics.

He was honored with the international Lenin peace Prize twice, one in 1950 and another in 1961. By this time, he was an international celebrity and one of the world’s most famous living artist.

His paintings received criticism and ridicule until the late 1980s after his death, when his last paintings began being appreciated for their profound influence on the upcoming generation of young painters.

Like any other passionate artist, Picasso continued to ambitiously work on his art with the belief that work would keep him alive.

He enjoyed creating art in different mediums throughout his life and would always become a master in each medium in due time.

From Picasso ceramics to etchings, pastel paintings, lithographs and linocuts, all his artwork was a testament to his artistic skills. He was married twice and had four children.

He died in April 1973 in Mougins, France, while he and his wife were entertaining a couple of friends for dinner.