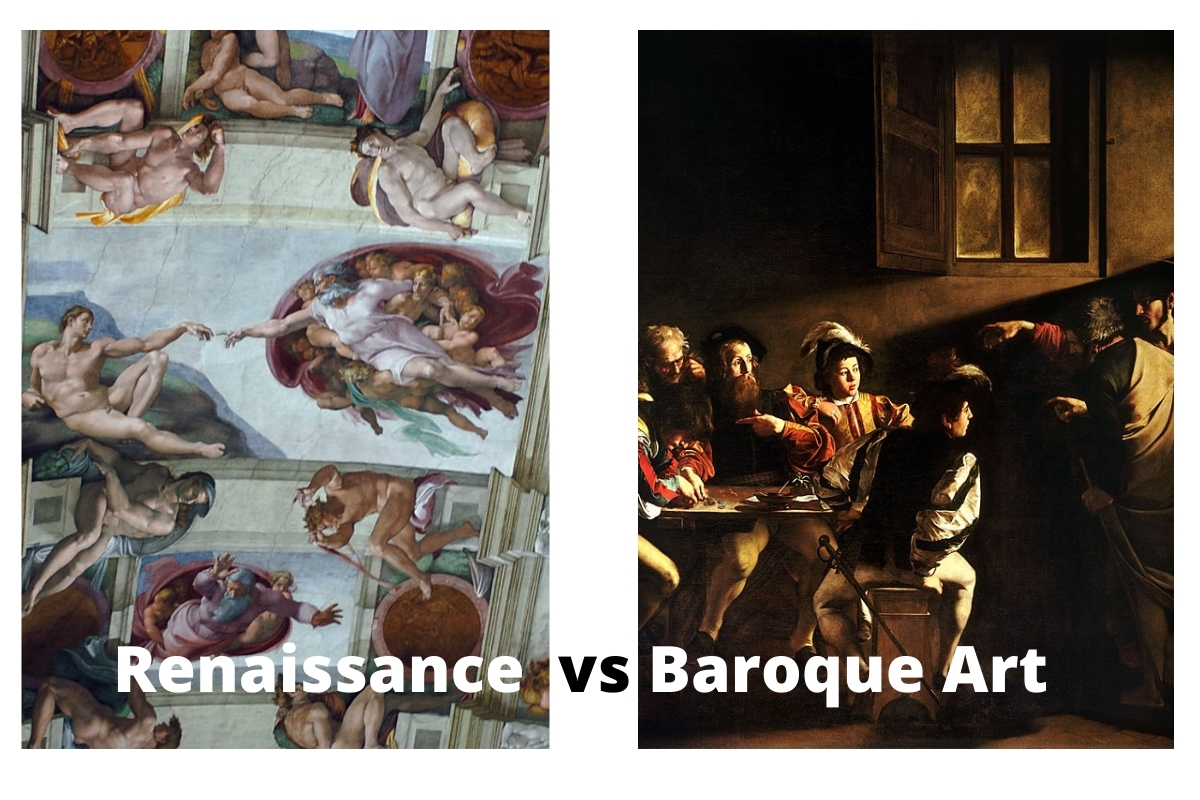 One of the most popular and influential times in art history began in what is known as the Renaissance period, which began in the 1400’s in Italy and would later spread to other areas of Europe.

The Renaissance is arguably the most famous time period in human history as many of the skilled artists worked to produce some of the greatest masterpieces ever created during this time.

According to most art historians, the Renaissance lasted until the end of the final years of the 16th century before the Baroque period emerged as the dominant form of painting in Italy and other countries throughout Europe.

While the Baroque and Renaissance style of painting have many similarities, there are some striking differences that should be noted when comparing both types of art movements to one another.

Baroque, like the earlier Renaissance period that preceded it, consisted largely of paintings that centered around religious scenes and stories from the Judeo-Christian Bible. While Renaissance artists mainly portrayed religious scenes and figures as closely as they could to the descriptions provided in Scripture, Baroque artists took quite a few more creative liberties with their works that focused on religious concepts.

Taking a closer look at this and many other differences between Baroque and Renaissance artists and their paintings reveals some interesting characteristics that are unique to both movements.

Origins of the Renaissance Period

The Renaissance art period emerged in the middle ages in the 15th and 16th centuries. The movement’s epicenter was in Italy where artists were heavily influenced by their Catholic faith as the Roman Catholic church was centered in the country.

The art style was very heavily involved in the Catholic faith and many of the most famous Renaissance masterpieces are devoted to portraying some of the Bible’s most prominent stories and recorded events.

Many Greek scholars and artists themselves moved to Italy during this time since Italy was explosion of trade and growth thanks to its close ties with the church and the rest of the known world at the time.

Some of the most famous artists of all time were born and worked in the Renaissance period. Great artists like Leonardo da Vinci, Michelangelo, Raphael and others were hailed for their brilliant inventive abilities, as well as their ability to paint incredible works of art.

The people of Italy, during this time, experienced a breakthrough in the areas of science, mathematics, literature and other areas that marked a clear improvement over the centuries that had come before them.

Unlike periods that preceded the Renaissance, this movement consisted of artists who were interested in portraying the world in a more realistic manner that seemed to have a greater focus on the individual beauty of each human or animal form, as well as any other object like plants, architecture and other figures.

The Renaissance, which rose from the ashes in the wake of the Bubonic Plague in the mid-1300’s, finally began to wind down toward the latter half of the 16th century. While many art scholars and historians dispute just when the Renaissance movement is said to have ended, most agree that it faded away in the early 1600’s.

Origins of the Baroque Movement

The Baroque period was born out of the Renaissance during the early-to-mid 1700’s. Many Italian artists began painting in a way that more closely aligned with the Baroque period in the early 1600s, but this art style was mainly centered in Spain and Portugal.

The Baroque movement was one that featured paintings by masterful artists who were able to implement a high degree of contrast between light and darkness in their works.

This clear difference in light and dark was mainly aimed at accomplishing a symbolic meaning that goes back to the Biblical teachings that God is light and is always associated with bright lights while evil and demonic influences are often described as being associated with darkness.

In addition to the contrast between light and darkness, Baroque painters worked to achieve a much higher level of realism and detail in every minute aspect of their paintings. This was in clear contrast to many movements that preceded them and is one of the clear defining factors of the Baroque movement.

What was perhaps the most clear difference the Baroque painters had from their Renaissance counterparts was the use of warm and often intense colors in their works. The bright light often helped to bring out high levels of coloration in each specific hue, but overall, the Baroque movement was one of color.

Some of the most prominent Baroque painters like Michelangelo Merisi da Caravaggio, Domenichino, Artemisia Gentileschi, and many others shaped the movement with an exciting new flair for both realism and bringing out a high level of beauty in everything they produced.

The Baroque movement was also spread to areas like France and Germany, which produced notable painters like Nicolas Poussin and others that are today remembered as some of the greatest Baroque painters of all time. Peter Paul Rubens was a Flemish painter, but could also be included in any list of the top Baroque artists in history.

The Baroque period was highly popular and continued from the early 17th century well into the 1800’s in central Europe, as well as the Iberian Peninsula. Many Baroque painters created masterful paintings that were featured as giant murals in the most popular cathedrals and chapels during this time period.

It was followed by the Rococo art period, both the Baroque and Rococo art movements although often confused are quite different in that Rococo departed from the dramatic symbolism of the church and focused more on the extravagance of the ruling elite classes.

The Renaissance period was a time in which artists were seeking to depart from the periods and styles before them in a way that offered the viewer a much greater appreciation for the subjects they depicted.

The introduction of oil painting helped lead this movement’s explosion across Italy and other areas of Europe as painters were then able to achieve a much greater level of detail in the smallest portion of a particular work.

Many oil painters developed their own methods for making and mixing this new art medium which was extremely expensive for the time.

While the Renaissance period offered a higher level of detail from earlier painting styles, it wasn’t until the Baroque movement that artists were able to achieve truly breathtaking levels of realism in their paintings.

The higher level of detail and more realistic depictions of the Baroque period can often be explained by artists who had greater access to better brushes, as well as better colors than the painters who had worked centuries before them. Many Baroque artists were able to paint their subjects with an astounding level of detail, down to the smallest facial expression.

Another notable difference between the Renaissance and the Baroque art periods is the use of light in their works. For Renaissance painters, light was simply used to define their subjects and the overall scenes they intended to portray.

Some painters would use a varying degree of light and darkness, but for the most part, paintings from the Renaissance were evenly-lit and offered the viewer very little difference between light and darkness throughout the entire canvas.

Baroque painters used light in a drastically different manner than their predecessors. For the most prominent artists during this time, light became a subject in and of itself.

Many of the most famous Baroque artists like Caravaggio and others used intense, bright lights to illuminate the canvas in a way that looked as if there was real light beaming in from some distant source.

The high level of contrast between light and darkness also added an element of mysteriousness to Baroque paintings. Many of the greatest Baroque works’ canvases feature large portions of darkness that leave the viewer to image more about the painting than they are actually able to see with their own eyes.

Light contrast and color are some of the most distinguishing differences between these two periods, but art critics and historians note a much deeper level of contrast between the two styles based on subject matter.

Comparing the two art styles side by side reveals a clearly more intense level of dramatization of each individual in Baroque paintings. Many artists during this time period sought to paint certain Biblical stories and other events in such a way as to depict the very moment of what a playwright would point to as ‘climax.’

Baroque paintings are largely aimed at capturing the very moment certain remarkable events in history occurred. This was something that seemed to drive Baroque artists to deliver more lifelike and profound works than the masters of the Renaissance period had done.

While there may be many more differences between the Renaissance and Baroque art movements, there are also many obvious similarities. These two periods in art history had as much of an impact on humanity as a whole as any two successive art periods have ever made.

One could argue that there are many different degrees of hidden meanings in some of the greatest Renaissance paintings as it is common to observe geometric shapes depicted on the canvas, but Baroque artists had their own way of portraying scenes in a way that was highly impactful on the viewer.

The raw emotion that the Baroque painters depicted their figures and subjects with is something that was initially begun by Renaissance painters many years earlier. These two art styles covered a span of just a few centuries, but one can measure their impact on all humankind by the sheer number of iconic paintings from both eras.