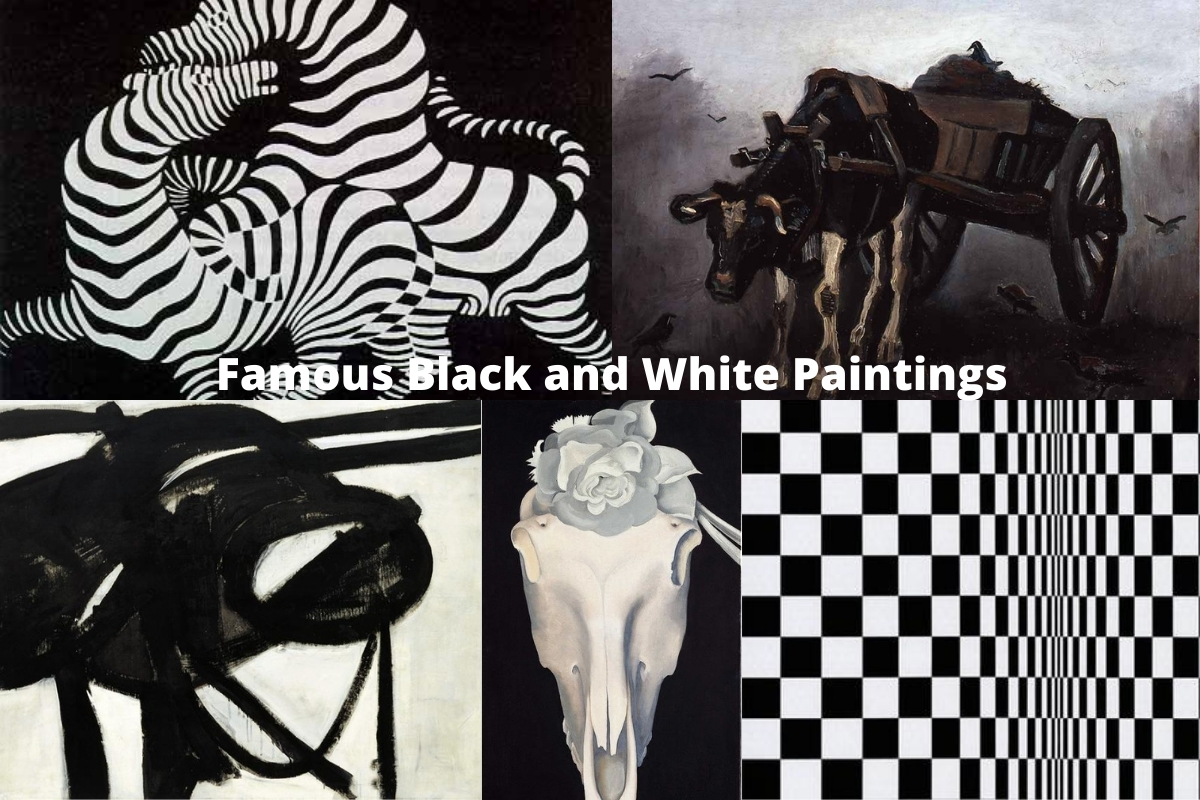 Many of the most famous paintings in the world were done in stark, black and white medium. Artists throughout history have used black and white paintings to emphasize various contrasting ideals or realities from our world.

However, there are many artists who have utilized these two iconic colors in opposite fashion with black highlighting some of the more defined areas of the work.

In this article, we’ll explore some of the most famous black and white paintings ever done and take a closer look at the reasons why so many in the world of art consider them to be among the most memorable works.

Pablo Picasso is one of the most famous painters in history and many of his abstract works have been viewed by art critics and enthusiasts as symbols of striking metaphoric meaning.

One of his most famous works, titled Guernica, is known for its stark depictions of a horrific bombing campaign launched by Nazi Germany before the outbreak of World War II.

This painting emphasizes the total destruction wrought by war as it depicts animals, humans, and the cityscape of Guernica being reduced to rubble in the onslaught of the German bombing.

Picasso’s intention with this painting was to highlight the destructive power of hatred and warfare, most importantly towards those who are innocent of the bloodshed.

The painting portrays a mother crying over her deceased child, as well as other humans and even a horse caught up in the horrific scene.

The black and white coloration is meant to further emphasize the nature of war being evil as it lessens all of life on Earth down to a simple representation of those who are believed to be ‘good’ and those who are viewed as the ‘enemy.’

Georgia O’Keeffe is a prominent female artist who was known for her paintings of intensely close-up flowers and other natural subjects.

She was a master of color and her works often featured soft hues that were blended to perfection in the petals of the flowers she loved to paint. One of her most famous paintings is known as Morning Glory with Black.

This 1926 painting is another quintessential example of why so many art lovers flocked to see O’keeffe’s works during her career and ever since.

The painting is a simple close-up view of a morning glory, a flower known to only bloom during the few hours of soft light at the break of dawn and shortly after.

O’Keeffe’s painting is thought to be a representation of the fragile nature of life on Earth as the morning glory flower is known to last only a few months out of the year and its blooms are only visible during the early morning hours.

Her attention to detail is part of the reason so many admire O’Keeffe’s works, but this painting also brings attention to the flower’s details as it is void of color and done in black and white.

Mark Rothko is one of the most famous abstract artists in history and was widely known for his overly simplistic style of block paintings that featured various depths of colors.

One of the most famous black and white abstract works he ever created was known as Untitled (Black on Gray) 1969.

This work is a simple painting of a black and gray block, one stacked upon the other. While this painting might seem so simple as to be elementary to the untrained eye, Rothko used contrasting and complimenting colors in a masterful way that has never quite been replicated.

The stark contrast of the fading gray coloration seems to further highlight the defining nature of the black block in this painting. It is known—the world over—as one of the most famous black and white paintings ever done.

Abstract art and many other, similar concepts took the world by storm in the early 20th century.

Many artists worked in various forms of abstract painting, but Franz Kline developed a style that was truly unique in its use of definition and other elements.

One of his most famous works is known simply as Chief.

This painting was created in 1950 and is considered to be a beautiful use of black and white.

Kline famously noted that he worked hard to paint both colors that are represented on the canvas instead of simply allowing the void blank space of the canvas to serve as the ‘white’ portion of his masterpiece.

Few artists were able to grasp the subtle elements of nature in the same way Vincent Van Gogh could. Many of his most famous paintings depict flowers or a serene pond setting, but one of his most notable works was done mostly in black and white.

This painting, titled Cart with Black Ox, was done in 1884 and features a lone ox saddled with a cart and left in a seemingly barren field.

The bleak, rather dark painting is one of the most famous early works done by Van Gogh and is known to be a representation of the depressing nature of hard, physical labor that was so common during this time.

Van Gogh blended intense black coloration with the ox’s white legs and created the cart and other elements of the painting in unique detail.

The simplistic nature of Abstract art is often misunderstood by some art lovers and enthusiasts, but considered to be a time of distinct artistic expression that characterized much of the early 1900’s.

One of the great Russian artists Kazimir Malevich was known for working with intensely simple concepts in many of his paintings, one of which being known as Black Square.

This work prominently features a large black square that envelops most of the canvas.

It was created in 1915 and was noted for being associated with the bustling abstract movement that was gaining steam in Russia during this time.

Malevich proclaimed that his painting was of a totally distinct style which he titled Suprematism.

The use of a dominant black square that was situated in the middle of a blank canvas was a concept considered strange by some accounts, but the painting is known for its evocative nature when it comes to forcing one to confront their own understanding of perception.

Another work that was done by Pablo Picasso and featured a vast canvas of black and white, abstract figures is titled The Charnel House.

This work, like his famous Guernica, was one that forced the viewer to pay much closer attention to the forms and subjects in the painting as it is largely void of color.

The work is one that was unapologetically political in nature as it featured a horrific scene of a murdered family strewn across the floor of a dining room.

Picasso is known to have created works like this that were aimed directly at confronting the brutal nature of Nazi Germany and the nation’s destructive policies that wrecked so many European nations.

This painting was done to represent the total destruction that was so often associated with German occupation as the Nazi armed forces were notorious for killing innocent civilians.

As the period of Abstract art began to inspire many offshoots and new movements of their own during the mid-20th century, the era of optical illusion burst onto the scene by 1960.

Bridget Riley is perhaps the most famous painter from the movement and is credited with moving the concept of optical illusion into the eye of mainstream America and other countries.

Movement in Squares is largely considered to be one of the most famous optical illusion works ever created as it delved into a newly discovered sense of perception and the human concept of subjective works.

The squares in this painting seem to slowly dip into a crease that is masterfully done by Riley.

This illusion was accomplished by a simple manipulation of the width of each column of squares—which Riley is known to have dabbled with to create many other incredibly famous optical illusion paintings.

Victor Vasarely is credited as one of the founding members of the optical illusion movement’s beginning as he created many paintings that dabbled in various natural settings that seemed to play tricks on the human eye.

One of his most famous works was done in 1937 and features two zebras playfully locked together in what appears to be an embrace.

The work is known simply as Zebra and was one that has been viewed as one of the earliest works of the optical illusion style of painting.

Vasarely used the unique pattern of zebra stripes to work in a manner that further emphasized what was possible when one observed some of the strange patterns of nature.

The artist recreated this work again in 1965 using a negative variation with a white background and black representing the white sections on the striped zebras. Both works are some of the most famous black and white paintings ever done.

Georgia O’Keeffe’s most iconic paintings were those which featured the skulls of horse or cattle, which was commonly associated with the American West.

She ventured into the western portion of the United States and fell in love with the colorful nature of New Mexico and its painted deserts, as well as the local culture.

O’Keeffe painted Horse Skull With White Rose in 1931 after spending a considerable amount of time in the region.

This work, like so many of her other paintings, takes a much different perspective on the natural perception of objects like a horse skull and flowers and merges the two into a truly distinctive style that explores the thin line that separates life and death.

The black and white coloration used in this painting seem to only further highlight the fragile nature of life itself.