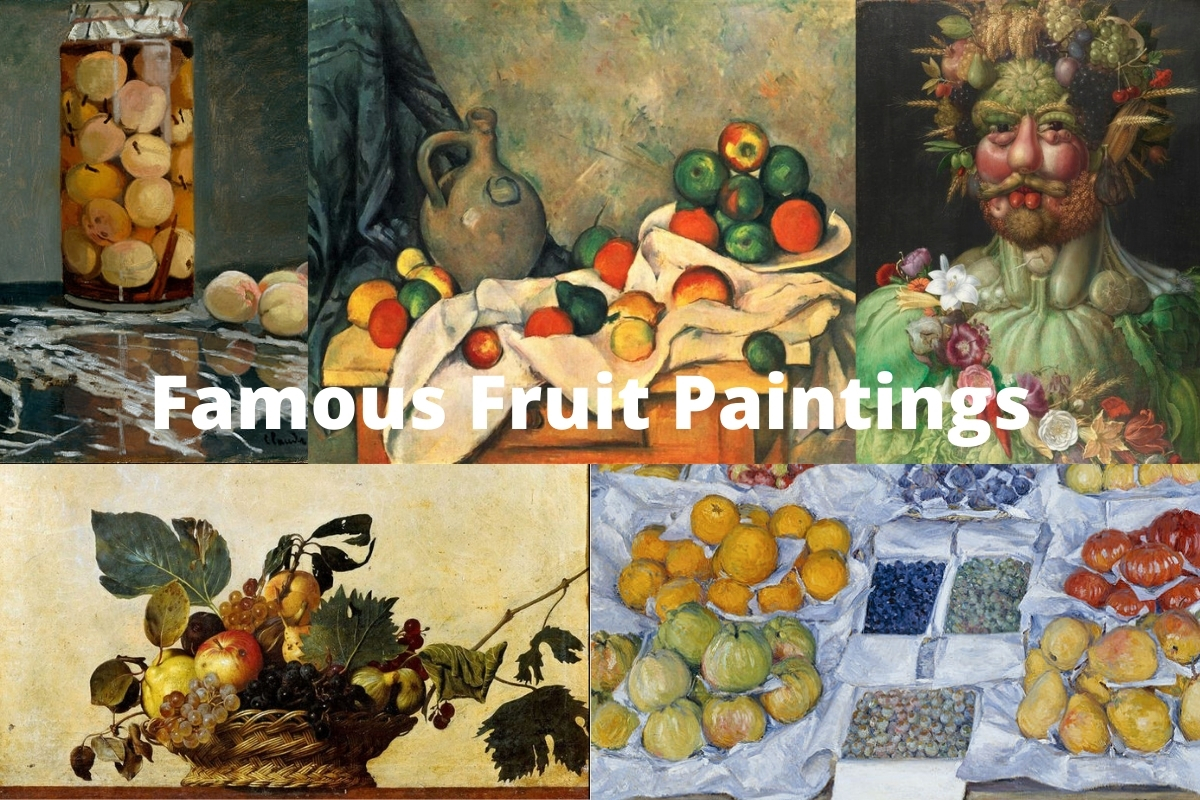 Natural objects have always been among the most popular subjects focused upon by some of the greatest artists throughout history.

Fruit has long been a central focus by the most accomplished artists as it represents life and nature in a vibrant, unique and colorful way when compared to other still-life objects.

Fruit are commonly used in still life paintings due to their distinctive coloration and variable shapes. Famous artists throughout many different art styles and movements have centered their most widely acclaimed works around fruits in different forms.

Artists such as Paul Cézanne, Vincent Van Gogh and many others are noted for their works pertaining to fruits.

Here are 10 of the most famous fruit paintings ever created.

Paul Cézanne is famous for his ability to portray various objects with a differing perspective than what most people would normally view.

His work titled Basket of Apples is arguably the most famous fruit paintings ever done, largely due to his strange, but attractive portrayal of the objects within the painting.

Done in 1893, the painting features a large basket of apples spilling out onto a table that’s also adorned with a wrinkled tablecloth, as well as a bottle of wine and some cookies.

Each object possesses its own unique shape, color, and even its own angles when compared to the rest of the work. Many early critics viewed this as Cézanne’s inability to properly capture certain aspects of a still life scene, but later art lovers and enthusiasts took note of the differences as something that truly made the painting a masterpiece.

Most of Cézanne’s followers and admirers claimed that the artist depicts the scene in a way that offers many different perspectives that come together for a truly unique portrayal on the canvas.

The apples seem to be rolling off the front of the table, yet the surface appears to be slanted from right to left, which causes the wine bottle to tilt in the slightest manner. The many different uses of perspective are part of what makes this painting so special.

2. Still Life with a Basket of Fruit – Caravaggio

Italian Baroque painter Michelangelo Merisi da Caravaggio was known for his mastery of painting scenes that depict stark contrasts between light and dark.

His work titled Still Life with a Basket of Fruit is among the greatest fruit paintings ever done and shows the artist’s ability to capture variations in light and dark while working with different colors.

Painted in 1599, this work was among the few still life paintings the artist created as he mostly focused his efforts on religious scenes from Christianity. The painting is on display at a library in Milan, Italy and curiously draws the attention of art enthusiasts and critics alike for its peculiar portrayal of fruit.

Caravaggio painted a simple basket of fruit sitting on a table that appears quite simple upon first glance, but a closer look reveals curious levels of degradation in the fruits painted on the canvas.

Some of the leaves have been eaten through by a small worm and much of the fruit, as well as the grapes appear to have gone well past their ripened stage and have begun to rot.

The artist likely chose to portray the fruit as a metaphor of sorts that shows an image which seems beautiful, but a closer inspection reveals some undesirable characteristics.

Claude Monet was a French artist and founding member of the Impressionist movement, but some of his earlier work drew a considerable amount of attention. His painting titled Jar of Peaches is widely considered to be one of his most underrated works as it displays a range of talent from the young artist.

Done in 1866, Jar of Peaches is a famous work that depicts a towering jar of preserved peaches that cast a unique reflection across a marble slab.

Monet’s ability to portray the jar’s reflection on the marble is what truly makes this painting a masterpiece. The artist’s later life produced numerous natural paintings that focused on landscapes and flowers, but this particular work is an excellent example of his earlier work.

4. The Meal, also Known as the Bananas – Paul Gauguin

Paul Gauguin traveled to Tahiti to paint works that portrayed life on the picturesque island and its people. His work titled The Meal, which is also Known as the Bananas was one of the first paintings the artist produced after his arrival and was painted in 1891.

The painting features some bananas and other fruits including guava and oranges placed on a table with three children seated in the background.

Gauguin painted what might first appear to be a natural setting, but this particular scene isn’t at all a traditional form of dining for the island people, who did not commonly eat food placed on a table at this time.

The artist’s depiction is one that focuses mostly on the proportions and the children’s reaction to the food in front of them.

This work is known for its portrayal of light and darkness of the partially shaded table and is a testament to Gauguin’s fascination with Tahitian culture.

Fruit like apples are one of the most distinctive still-life objects to portray as they are often colored with varying hues that range from greenish yellow to bright red. Such is the case with Camille PIssarro’s work titled Still Life with Apples and Pitcher.

This painting was done in 1872 and is one of the few still-life works done by the artist.

The painting features a very simple, yet elegant scene of apples placed on a plate with a pitcher and glass.

The natural lighting that Pissarro was able to capture in this painting is part of what makes it one of the most distinguished fruit paintings of all time, and is mostly what the work is recognized for.

One of the most famous still-life paintings created by a Spanish painter is Francisco de Zurbaran’s Still Life with Lemons, Oranges and a Rose. This painting was done in 1633 in Seville during a time when artists were known for striving to paint scenes in a manner that was as realistic as possible in every detail.

Zurbaran’s work depicts a table with three offerings placed upon it that represent significant levels of religious interpretation. A devout Catholic, Zurbaran painted a scene that was representative of the Holy Trinity that is so often portrayed in religious works from the time.

The fact that the artist chose to include the reference in this still-life work shows a deep devotion to the Catholic faith. The artist’s work is also one that depicts intense levels of light and dark transitions that also have religious undertones that were common during the 17th century.

John Singer Sargent was an Italian-American artist that produced works which many considered to be nearly photogenic in composition and realism.

His work titled Pomegranates is truly distinctive in character. The painting was created in 1908 and features a lush, green aura surrounding ripening pomegranates.

Many art critics and enthusiasts view this painting as being inspired by the artist’s ventures to the island of Majorca.

The painting is void of any spatial reference that most other works in this style use and Sargent’s depiction of the vibrant green pomegranate bush extends out to the edge of the canvas.

No work depicts the wide range of radiant colors that certain fruits can possess better than Gustav Caillebotte’s painting titled Fruit Displayed on a Stand.

This work was done in 1881 and is a simple portrayal of a common scene one might find at a fruit stand with the different types of fruits separated by neat, white cloth-covered baskets.

The range of colors is part of what makes this one of the most famous fruit paintings of all time. The artist evenly distributes the lively colors across the canvas in a way that’s evenly partitioned and patterned.

The vibrant colors of the oranges on the left side of the painting are enhanced by the subtle green hues of the pears adjacent to them. Likewise, the bright red colors are well-balanced by the softer yellows on the right side of the canvas.

One of the most unique fruit paintings ever created is Giuseppe Arcimboldo’s portrait titled Vortumnus (Vertumno). Painted in 1591, this work focuses on the Roman Emperor Rudolf II and is a strange, but attractively-arranged portrait of various fruits, vegetables, and flowers that comprise the emperor’s bust.

The artist’s clear intent was to connect the ruler with Vertumno, the Roman god of seasons, as well as plant growth.

Many critics believed the painting was intended to be a joke, but the artist commented that the use of plants and fruits to represent the powerful emperor was done in order to portray the manner in which he had risen to power.

This is one of the more fascinating and creative pieces of art from the Renaissance period and the painting is currently on display in Sweden where it has remained since the mid-1600’s.

Vincent Van Gogh was known as a master of still-life paintings. His ability to portray natural plants, trees, and other objects including fruits is unlike any other artist throughout history.

Van Gogh’s work titled Still Life With Apples Pears Lemons And Grapes is arguably one of the most famous fruit paintings ever created as it features an array of fruit uniquely situated on a tablecloth.

The painting is well-known as one in which Van Gogh began to experiment with wider brushstrokes and a combination of complementary colors.

The variation in hues are represented in a neatly-arranged scene of apples and pears that adorn the table and surround the luscious grapes that are sprawled across the center of the work.

The brighter green colors of the leaves are a welcome contrast from the deep red and purples of the apples and plums placed on the lower portion of the painting.

The odd pulsating manner in which Van Gogh painted the fruits, as well as the tablecloth is likely part of the works he described as being “violent still lifes.” This painting was part of a series of works devoted to fruits that were done by the artist in 1887.

We hope you have enjoyed our list of famous fruit paintings.